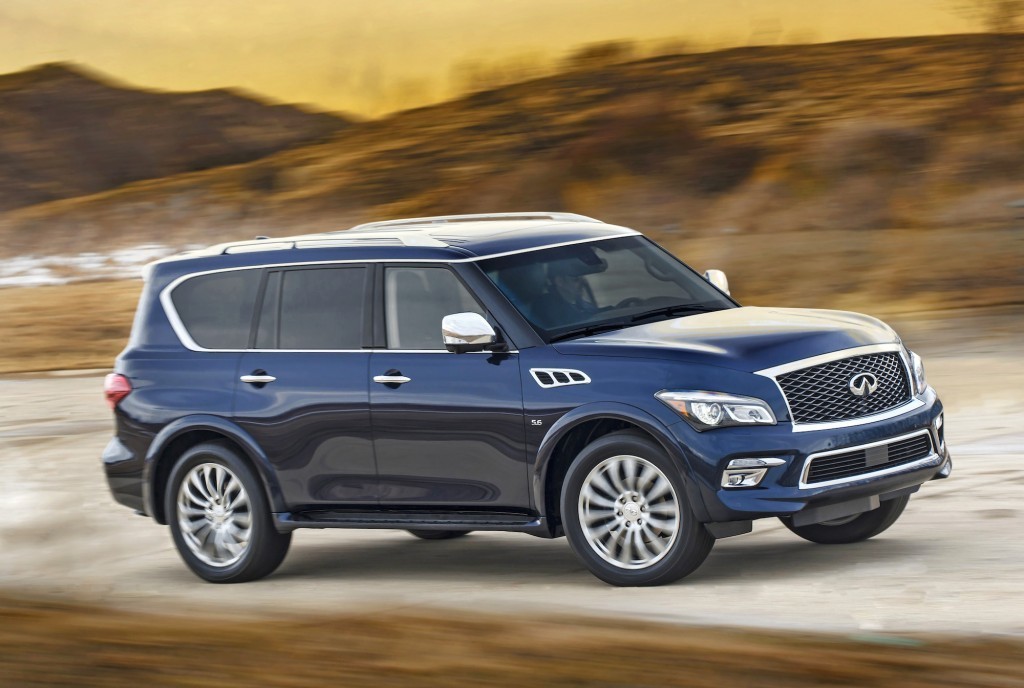 Infiniti tends to avoid the popular trends when it comes to their vehicles. Sometimes it works well and sometimes it doesn’t. The QX80 Limited is an example of when this choice works well. A sizable V8 engine gives the QX80 Limited a decent acceleration, but where this vehicle really focuses its attention is in the details. An appropriately luxurious interior contrasts the exteriors large and somewhat brutish styling. Standard features are numerous including a 13-speaker Bose audio system and an 8-inch touch screen with a host of optional extras available including forward collision warning and backup collision prevention. The QX80 Limited is rated at an EPA-estimated combined 16 mpg. A generous offering in the Luxury SUV class by Infiniti, the QX80 Limited will suit buyer’s looking for a vehicle that mixes class with function.

Lexus isn’t a company known for its off-road capabilities. Despite this, the Lexus LX 570 is a direct competitor to the Range Rover in the Luxury SUV off-road department thanks to its Toyota Landcruiser underpinnings. An impressive 383 horsepower 5.7L V8 compliments the LX 570’s 8-speed automatic transmission, a new upgrade for this year’s model. The = well equipped Lexus interior is a joy to be in and though the third-row seats can’t be removed, the Lexus will comfortably seat up to five adults. The large V8 suffers in fuel efficiency and is rated at an EPA-estimated combined 15 mpg, below average for its class. The LX 570 attempts to make up for this in driveability and comfort. An excellent choice for any buyer looking to get away from the Range Rover while maintaining its off-road capability. 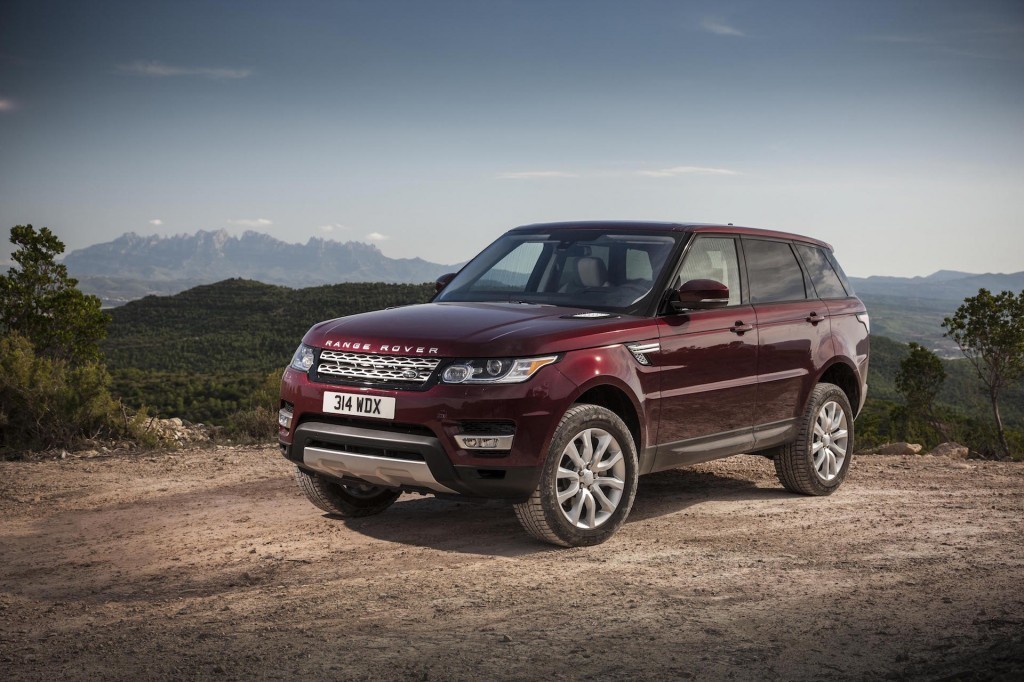 The slightly smaller little-brother to the Range Rover, the Range Rover Sport is one of the few large-size SUV’s that can be purchased for a sporty look and feel. The 2016 Range Rover sport still includes three rows of seating, though like in most Luxury SUVs the third row is best reserved for children. The same 3.0L Supercharged V6 makes an appearance for 2016, rated to produce 340 horsepower and an EPA estimated combined 16 mpg. Land Rover knows its market and does everything it can to play to that niche. The 2016 Range Rover is just as fun to drive as its predecessors and handles off-roading just as well. A very specific kind of buyer will be looking for this car and only this car, and will be very happy when they find it.

Cadillac continues to fill the role of the top American Luxury car manufacturer, a title they’ve held for many years. The Cadillac Escalade sits nicely in the Luxury SUV market as one of the biggest, most outwardly extravagant and loud vehicles on the road today. The exterior remains as large and imposing as ever and the exterior maintains much of its iconic look and feel, though some of this is lost in the 2016’s side and back-end. Still, the front flashes a toothy grin that almost challenges other car manufacturers to tackle it. With three rows of seating and a fantastic interior, the Escalade Platinum is looking to steal customers from its European competitors. A powerful V8 is rated at an EPA-estimated combined 17 mpg. It may not win over all of the European Luxury SUV crowd, but it will certainly attract a wide range of buyers looking for a different option. 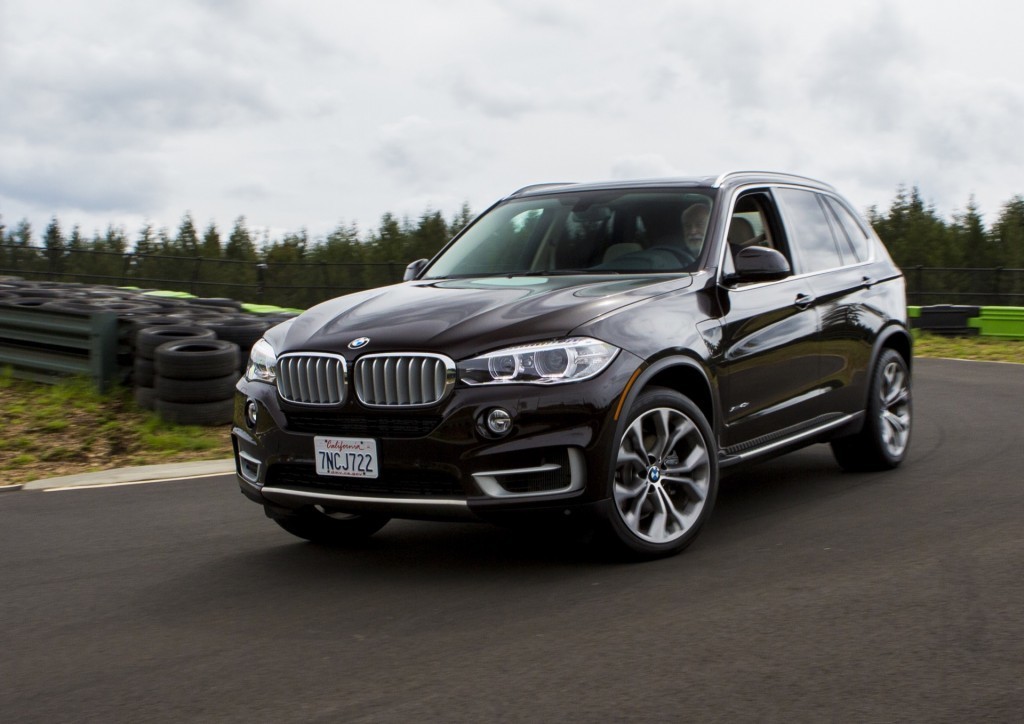 It’s hard to compete with the raw power of vehicles produced by BMW’s M division. The 2016 BMW X5 M is no exception. Blistering quick acceleration propels this SUV from 0-60 in 3.8 seconds thanks to its twin-turbocharged 4.4L 8-cylinder engine producing 567 horsepower. That’s a lot for an SUV and its fuel-efficiency retains a respectable combined 16 mpg thanks to the engineers at M. The vehicles’ utility does suffer from this all-or-nothing performance goal and the interior space on the BMW X5 M is moderate even for a mid-size SUV. Fortunately, its target buyer isn’t looking for a massive vehicle. BMW X5 M buyers want agile handling and swift acceleration and that’s exactly what this SUV provides. 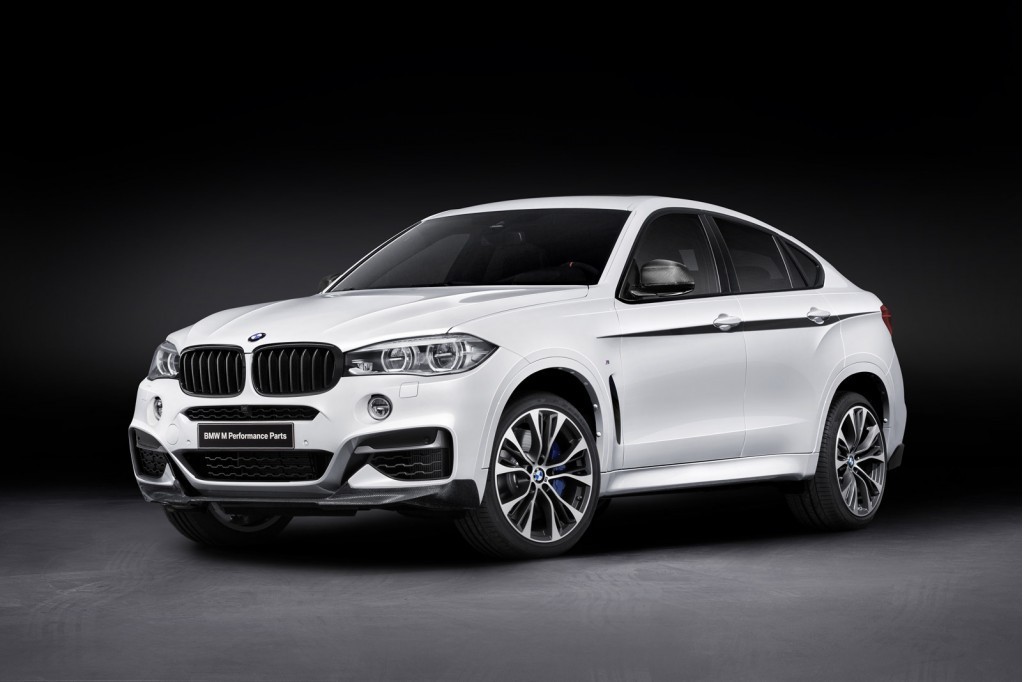 Another competitive offering from the M division, the BMW X6 is more of a sedan/hatchback hybrid than the crossover style it intends to mimic. The same 4.4L twin-turbocharged V8 in the X5 above powers the X6, but thanks to its smaller size and slimmer profile the X6 reaches 60 in 3.7 seconds instead of 3.8. The X6 also handles better, trading functionality for performance. The engine receives the same EPA estimate as the X5 for fuel efficiency, and the engine produces the same amount of horsepower. Once again aimed at a very specific type of buyer, the X6 delivers exceptional performance in a luxury package for the discerning SUV speed enthusiast. 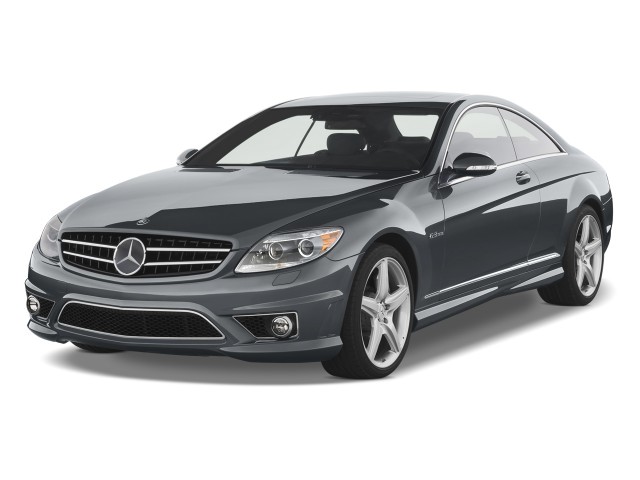 Similar to BMW’s M division, only with more madness and raw power, AMG produces some truly insane vehicles. The CL63 AMG is a slight deviation from this trend, as its clear AMG could have thrown everything to the wall with this SUV, and yet somehow restrained themselves in its production. A twin-turbocharged 5.5L V8 is rated to produce 550 horsepower coupled with a seven-speed automatic transmission. Larger than the X5, the vehicles handling does suffer a bit compared to the above offerings and only does 0-60 in 4.8 seconds. That’s still fast for an SUV and the CL63 AMG more than makes up for it in size and functionality. A true SUV, unlike the X5 and X6, the AMG offers more interior space, more cargo room and better seating. As is the standard for all Mercedes, the interior puts you in the lap of luxury. A smart choice for the Luxury SUV buyer seeking both performance and comfort. 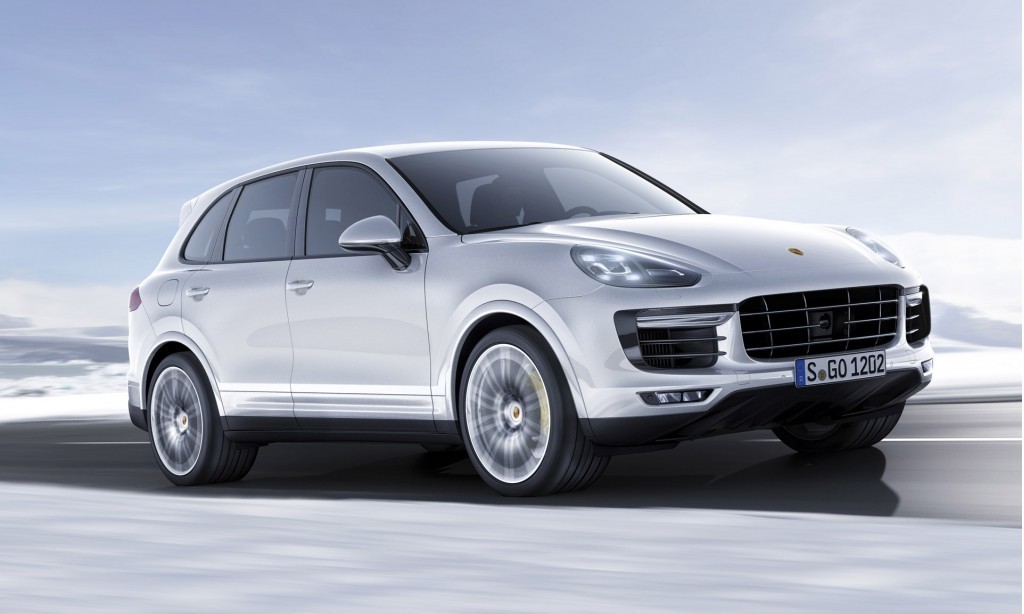 While it has been dethroned by the X5 in best-in-class acceleration, the Porsche Cayenne Turbo S remains one of the best performance SUVs on the market. It still features legendary Porsche handling and engineering and will compete with the best offerings from its competitors in overall performance. While the X5 may be faster in a straight line, as per usual Porsche has placed its focus on cornering and braking. Thanks to this attention to track detail, the Porsche clocked in at under eight minutes on the Nürburgring – the first SUV to do so. Its well-tuned 4.8L twin-turbocharged V8 puts out 570 horsepower and a power-hungry combined 14 mpg. While that may not matter to most buyers, the attractive, comfortable and highly functional interior certainly will. With plenty of space for its passengers and decent cargo capacity to boot, the Turbo S balances performance with function perfectly. Porsche has always understood the desired mix between luxury and speed, something they put on display with the 2016 Porsche Cayenne Turbo S. 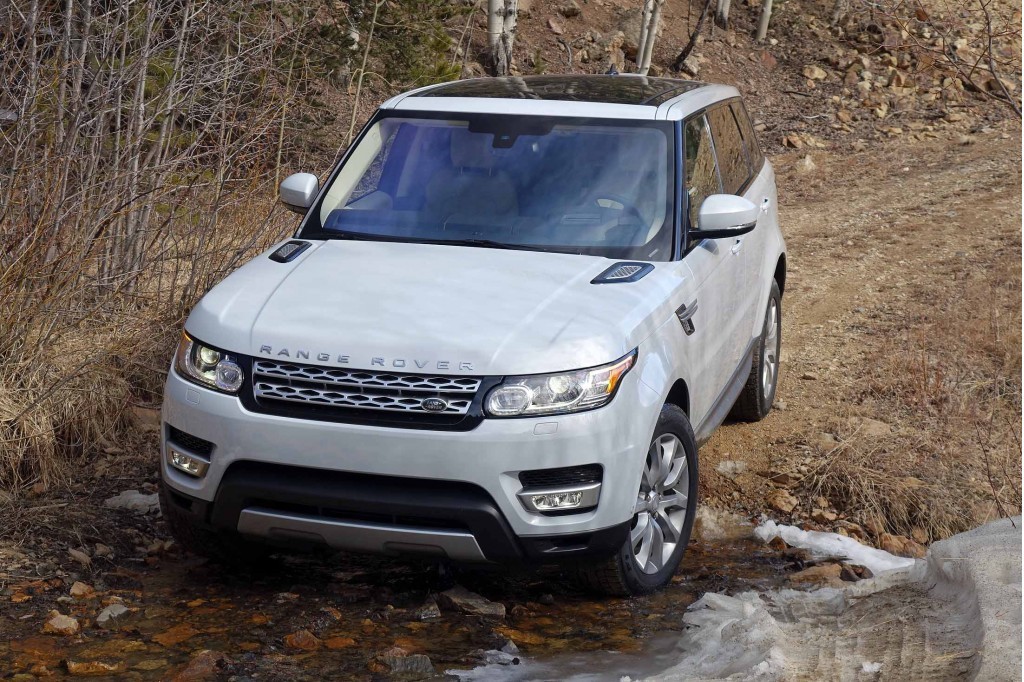 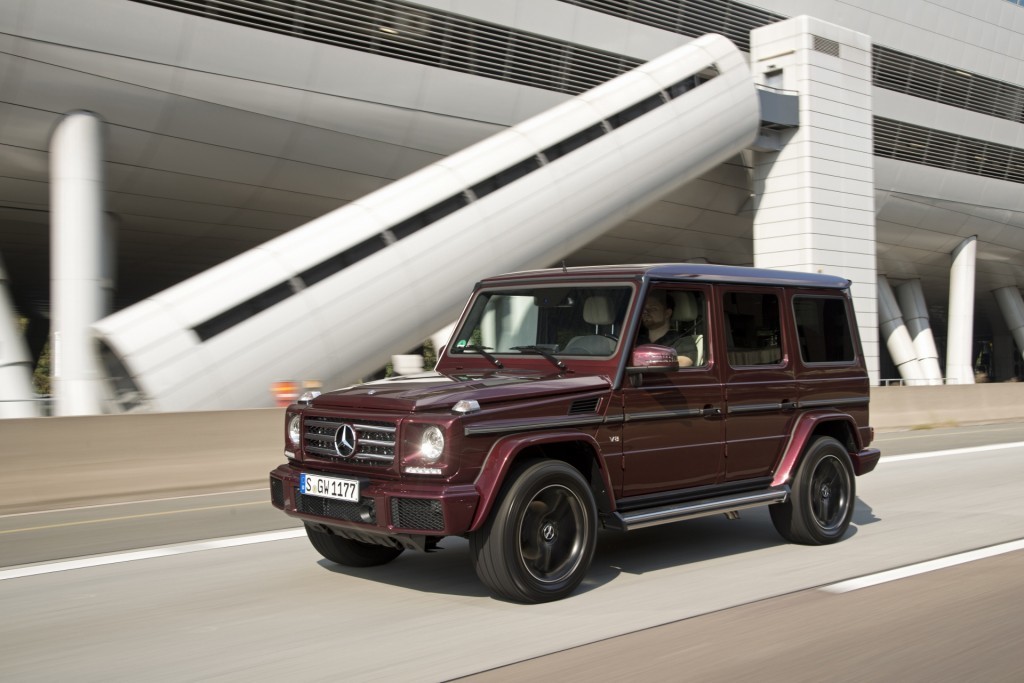 The madhouse that is Mercedes-Benz AMG division cares about only one thing: absolute raw power in exclusion of all else. This philosophy is in abundance in the second most expensive SUV – the 2016 Mercedes-AMG G65. Featuring a V12 capable of producing 612 horsepower, the G65 is essentially a rocket strapped to an SUV. Hearkening back to its older roots, the G65 looks almost the same as it did during its debut four decades ago with a boxy exterior and high-ceiling. This gives it a wealth of interior space and that space is used to fill the G65 with Mercedes-Benz luxury. Perhaps one of the most extravagant and comfortable SUVs on the market, the 2016 G65 doesn’t scream ostentatious in every direction on the outside, but it certainly does on the inside. The discerning and power-crazed SUV buyer will absolutely want to spring for the G65’s high price tag… just be sure to know where that insane power is taking you before you use it. 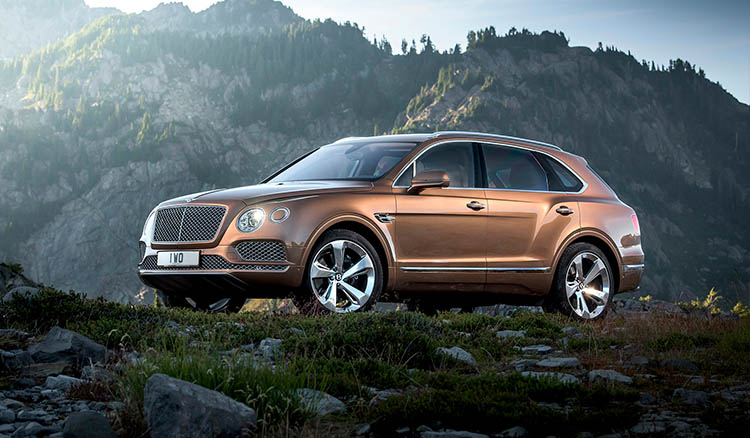 Bentley has a reputation for making some of the nicest and most expensive vehicles in the world. With the 2017 Bentayga Bentley plans to provide a luxury offering to their customers seeking the best SUV money can buy. A powerful 600 horsepower 12-cylinder twin-turbocharged engine sits under the hood and provides the Bentley with a reported top speed of 187 mph. Advanced suspension and a host of intelligent drive systems help make the ride in the Bentayga as smooth as any luxury sedan, while the new suspension and terrain response system makes the Bentayga a surprisingly serious off-road contender. The Bentayga offers seating for up to five in the lap of luxury Bentley is known for.

The interior itself shows the luxury manufacturer at the top of their game, with all the usual Bentley trimmings and features as well as a wealth of optional but expensive extras. Wood finish, analog gauges with real glass and only the finest leather are all to be expected in a vehicle made by Bentley, and all of the above are available here on the Bentayga. The vehicle itself handles like a dream, especially for an SUV, thanks to its expertly designed electronic steering and heavy duty brakes. There is little tilt or roll when cornering thanks to the Bentayga’s relatively small profile , which is more akin to a large hatchback than a true SUV, and its new adaptive roll-bar. Bentley has a loyal following from its customer base, and for years these customers have desired a top-notch SUV offering from one of the most well-known luxury manufacturers in history. These customers have finally had their prayers answered thanks to the near-perfect 2017 Bentayga.

Thinking of buying a one of these expensive SUVs? Already own one? Leave a comment and let us know what you think!