When choosing a vehicle with seating for nine or more, there are two distinct options available. One is the large vans meant as cargo and people-haulers. The other is to go with a large SUV with three rows of bench seats. Each class has its own distinct advantages and disadvantages and picking the one that fits your specfic needs is important. Below is a list of the top 7 best 9 passenger vehicles available on the market in 2015. 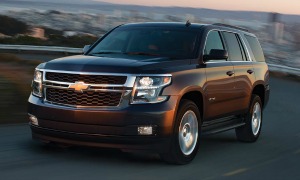 The Tahoe runs away with the best value award in this segment. It was totally redesigned for 2015 and has a base price of $45,500. That price includes all the seating and amenities for 8 passengers. You must select the split-folding bench seat option for the first and second rows in order to increase the seating capacity to 9.

One of the smaller options on this list, the Tahoe’s 5.3-liter V8 with 355 horsepower is quite capable and has a six-speed automatic transmission and can be either rear-wheel drive or 4×4. Chevrolet’s latest can also tow an impressive 8,600 pounds when properly equipped which is more than enough for a midsize camping trailer or a large boat. The Chevrolet does pay a price for its smaller size, offering less total passenger and cargo space than the vehicles that follow. 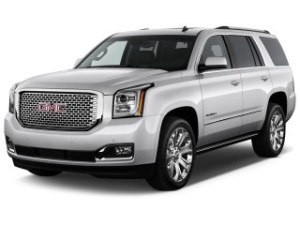 Think of the Yukon as the Tahoe’s slightly classier brother. Priced a bit higher at each trim level, the Yukon comes with extra standard features including a locking rear differential for extra stability when traveling over rugged terrain. Higher trim levels get a more-advanced, 8 inch touchscreen infotainment system that also serves as the monitor for the standard rearview camera system. The Yukon offers interior configurations with for 7, 8, or 9 seats.

At the high-end, the Denali offers BMW-level luxury amenities. Its unique grille and chrome exterior accents aren’t just for show – a powerful 6.2-liter V8 with 420 horsepower lies under the hood. On the inside, the Denali’s leather interior, panoramic sunroof and Bose 10-speaker premium audio system highlight a long list of features rivaling even the Cadillac Escalade. 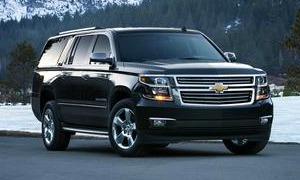 The Suburban received a full redesign for 2015. It is important to note that while the Suburban’s third row is roomier than the Tahoe’s, its 9 seat configuration is only available on the base model. A direct-injection 5.3-liter V8 with 355 horsepower and fuel-saving cylinder deactivation system comes standard. This engine is the same used in Chevrolet’s other new trucks and SUVs. It comes in a bi-fuel option that provides 16 city and 23 highway mpg.

The 2015 Suburban takes advantage of its massive size to offer impressive cargo dimensions. The third row bench folds flat at the touch of a button, but you won’t need to operate it often thanks to the 38.9 cubic feet of cargo space available when all 3 rows are in use. Both rear seats can be folded flat into the ground, revealing a total of 121.1 cubic feet of cargo space. Owners appreciate that the interior has improved significantly compared to last year in terms of quality, safety and available technology.

The Mercedes-Benz Sprinter starts at just under $36,000, but its price increases quickly as options are selected. Buyers who are willing to pay a little more in order to haul passengers will find a supremely capable vehicle with a finely crafted interior befitting of the German luxury brand. The Sprinter has the segment’s lowest load floor and there is an available high-roof version inside which 6-foot-3-inch individuals can stand straight up. When it is time to transport a large group of people, the Sprinter can seat 12 in four spacious rows of seating.

Base models come with a 2.1 liter four cylinder turbodiesel with 161 horsepower. The 3.0-liter turbodiesel option provides 188 horsepower and 325 pound-feet of torque, though either engine will be fine for hauling passengers. However, those who do a lot of heavy lifting may wish they had the V8 found on competing models. The Sprinter is surprisingly light so it never feels slow unless its hold is packed to the brim.

Traction and stability control systems come standard, as do front airbags and side-curtain airbags covering all 4 rows on passenger models. Advanced safety features including a rearview camera and forward collision mitigation system are available options. You won’t find the sumptuous leather and hand-cut wood of a Mercedes-Benz S-Class here, but the Sprinter’s interior is still a cut above other passenger vans. 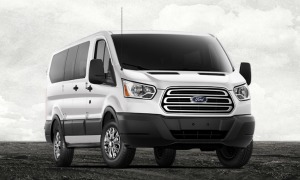 The European-style Ford Transit is all-new for 2015. Though still rugged enough to get the job done, the Transit ditched its truck-based bones in favor of a smoother riding unibody platform. Buyers have the choice of 3.7-liter V6, 3.5-liter turbocharged V6 or 3.2-liter diesel 5-cylinder engines. The van comes in two lengths and three roof height options that can provide seating for 8, 10 or 15 people. Although Ford’s latest is designed for the commercial market, it also can serve as the perfect hauler for very large families.

Ford has made the Transit’s passenger area easier to get in and out of thanks to center aisles and 3-point seatbelts that are now anchored to the backs of the seats instead of the van’s roof. Stability control, traction control, and full-length side-curtain airbags come standard while a rearview camera, rear parking sensors and a lane-keeping assist system are optional. Those who do a ton of driving should note that fuel economy is a very modest 14 city and 19 highway mpg. The heavy duty diesel mode is not rated by the EPA. With all this space and up to 4,650 pounds of payload when properly equipped, the Transit makes switching from work to passenger duties a breeze.

Thinking of buying one of these 2015 9 passenger vans or SUVs? Already own one? Leave a comment and let us know what you think!