Sometimes, a vehicle is needed that provides maximum seating capacity, hauling capability, and power. When these requirements must be met, we turn to the largest SUVs and vans available on the market. To help ensure your precious cargo, whether its people or packages, arrives in comfort and safety, here is a list of the best nine (or more!) passenger vehicles available in 2016. 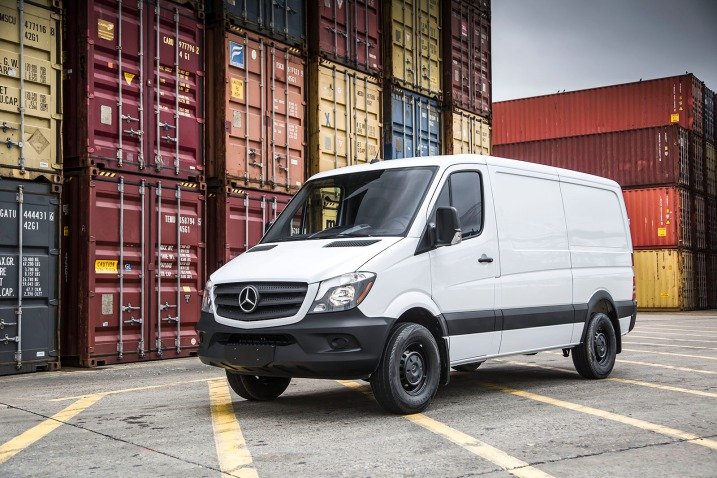 Trusted around the world for cargo transport and as a passenger carrier, the Mercedes-Benz Sprinter is a solid choice in the nine-passenger vehicle category. With seating for up to 12 or a massive cargo capacity, the 2016 Sprinter is a do-it-all workhorse van for companies with assets to haul or large families who need that extra room to fit everyone in. The standard 161 horsepower 2.1L turbo-diesel has sufficient power for this lightweight van to function as a work hauler. While official ratings from the EPA are not available for an MPG rating, given its diesel fuel type and small size the base engine can be expected to produce a respectable fuel efficiency.

The interior is spartan for a Mercedes-Benz, but functional in every way needed for an everyday cargo-vehicle. The exterior remains similar to older Sprinter models; it carries over the same boxy looks and tall height that’s been a staple since the models inception. As usual for Mercedes, the 2016 Sprinter has a wealth of high-tech safety features, including lane departure warnings and crosswind stabilization. A solid choice for anyone who needs the massive civilian-transport level capacity of the 2016 Sprinter. 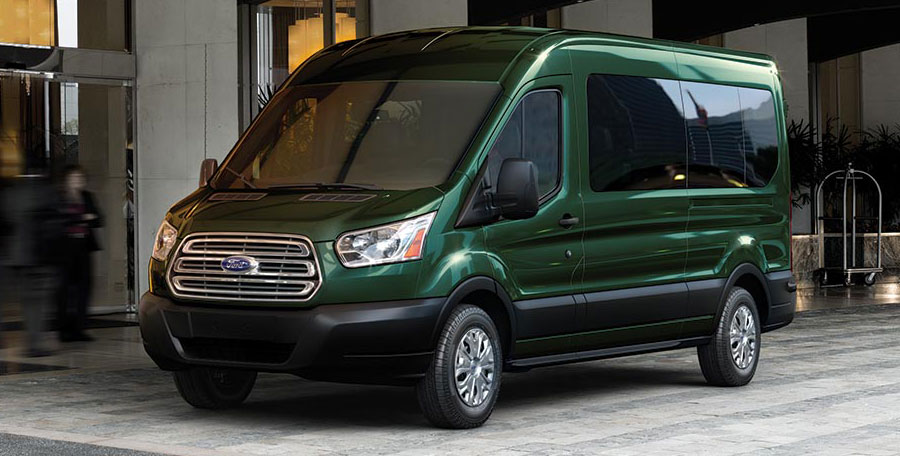 Much improved over the model it replaced, the Ford Econoline-series, the 2016 Ford Transit is the affordable option for the discriminating van buyer. Aimed at start-up businesses and large families, Ford has almost completely redone the vehicles powertrain to squeeze out every ounce of efficiency and power possible in this large van. The standard 3.7L V6 produces 275 horsepower and Ford even offers an eco-friendly option in the 3.2L Power Stroke turbodiesel. The standard powertrain is rated at a combined 16 mpg.

This van is rated to haul up to 4,500 lbs of cargo, depending on the model, and up to 7,500 lbs of towing capacity. Inside the Transit is functional but not uncomfortable. Seating can be arranged for up to 15 in the extended-length trim. There is a cavernous cargo space in all trim levels and the vehicles large exterior allows easy transporting and loading of large objects. The exterior itself is also functional without looking drab. Ford did everything they could to aim the replacement for their long-running Econoline-Series at the same market that made that model a best-seller and with the 2016 Ford Transit they’ve done an excellent job. 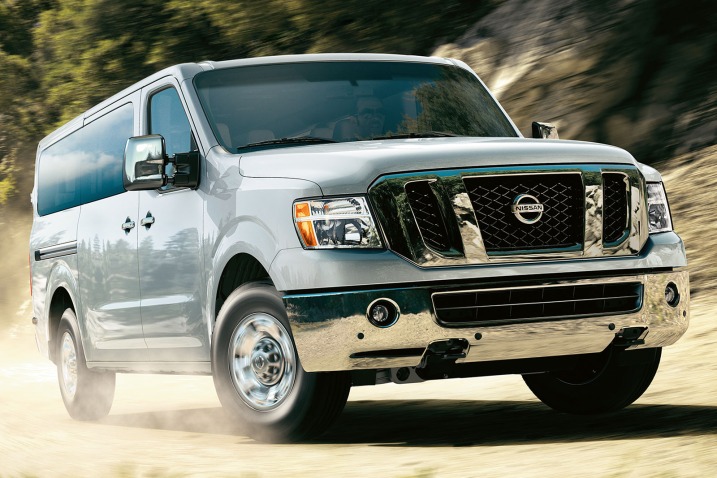 Falling between the large, tough, and rugged American style vans and the taller, boxier, more streamlined European-style vans the 2016 Nissan NV3500 HD is a clever balance between the two. Appealing to large families or companies with moderate cargo capacity needs the NV3500 fills a niche that may not be so small. Comfortable furnishings on the interior and a respectable list of high-tech gadgets available as optional extras will entice the average consumer to the van.

Nissan offers both V6 and V8 powertrain options but lacks the diesel option that most van-manufacturers offer these days. The fuel efficiency does suffer as a result and the vehicle produces a reported combined 13 mpg. A 234 cubic feet interior capacity and roughly 4,000 lbs of payload capacity will be appropriate enough for those looking at a moderate capacity hauler. The NV3500 fits nicely into an often neglected niche in the medium-capacity van market. 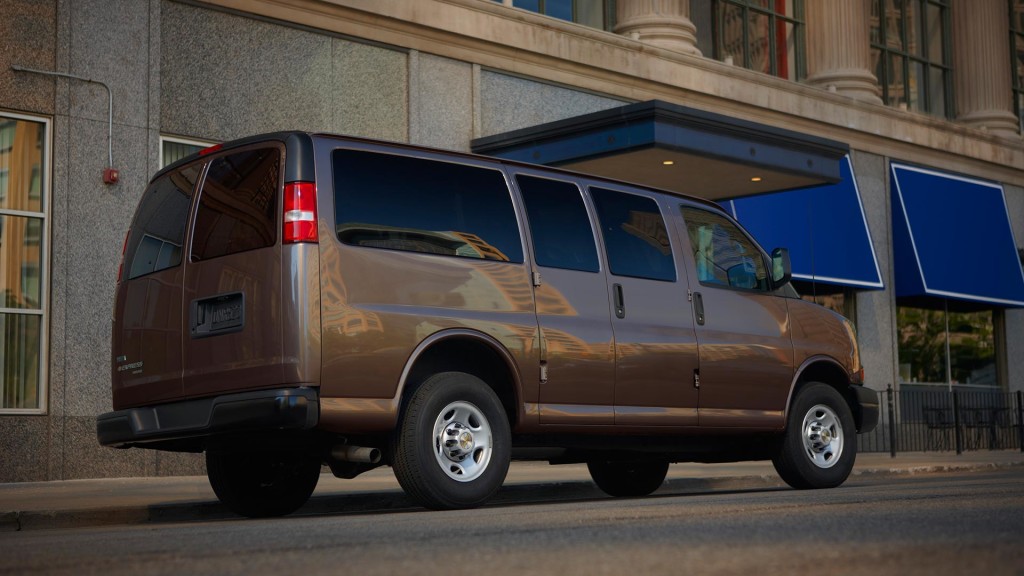 The Chevrolet Express has remained largely unchanged for many years. Still sporting the standard large-capacity van look and feel the Express will be familiar to many buyers both inside and outside. The interior mirrors the regular offering from Chevrolet with a handful of optional extras. While the interior is comfortable it lacks the cargo-maneuverability of some of its competitors due to the low ceiling and lack of space. Still, with seating arrangements that include 12-passengers as standard with eight and 15-passenger options, the Chevrolet express is a versatile people carrier and cargo workhorse.

Chevrolet offers two powertrain options, a V6 and a V8, with the V6 being rated at an estimated combined 13 mpg. Where the 2016 Express really excels is in towing capacity; the Express is rated to tow up to 10,000 lbs. That far outpaces its closest competition thanks to its body-on-frame holdover from years past. This does mean the vehicle itself is heavier and the handling also takes a hit. It should be appropriate for everyday use but don’t expect Formula 1 performance. Despite its reluctance to change with the times, Chevrolet’s 2016 Express remains a solid choice in the large-van market. 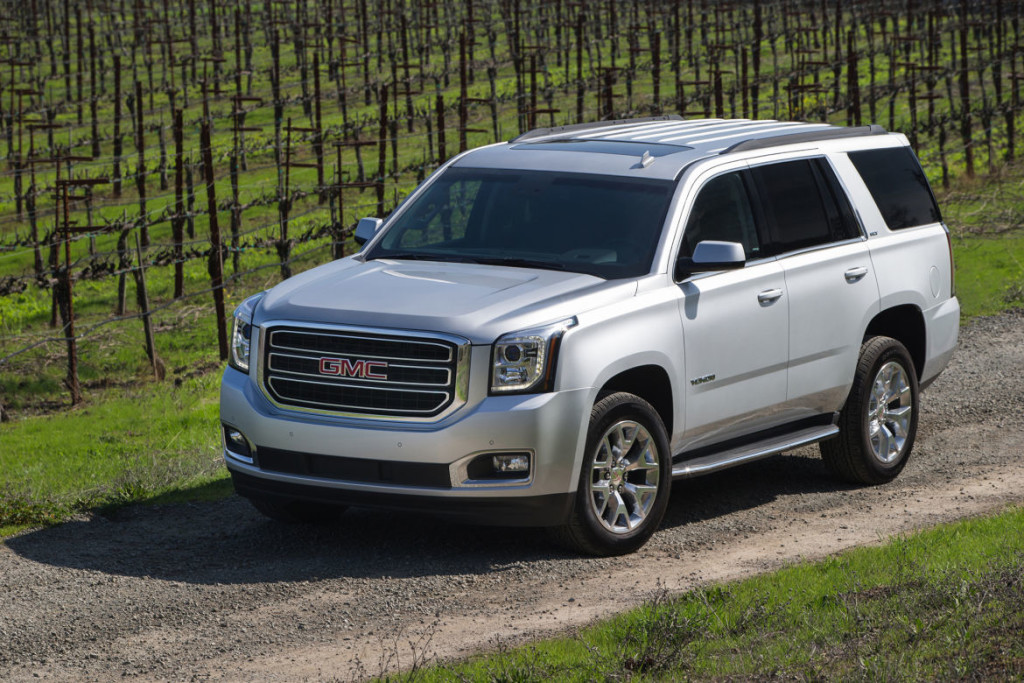 The 2016 GMC Yukon is one of the largest SUVs on the market today. The massive SUV provides seating for up to nine, depending on configuration, and offers more cargo-capacity than almost any other SUV on the market today. Interior space will vary from trim to trim, but the Yukon XL is by far the longest model. Continuing the trend of other GMC vehicles, the Denali luxury option aimed at the top-end of the buyer market is appropriately styled in lavish interior and exterior design. The standard 355 horsepower V8 gives the Yukon enough power to get the job done and an even more powerful 420 horsepower V8 is also available as an option.

Even though it’s an extremely large vehicle, the Yukon is a pleasure to drive. Ride comfort and handling are both exceptional for such a gargantuan SUV and the large V8 motor keeps the Yukon from feeling sluggish. The engine itself features the cylinder deactivation tech found in the Chevrolet Tahoe and even without taking that into consideration the Yukon is rated at an EPA-estimated combined 18 mpg. GMC offers a range of optional extras including a variety of safety features like collision detection. The 2016 Yukon is one of the largest vehicles on the road today and it provides a sense of style to go along with its rugged functionality that many buyers will find irresistibly attractive. 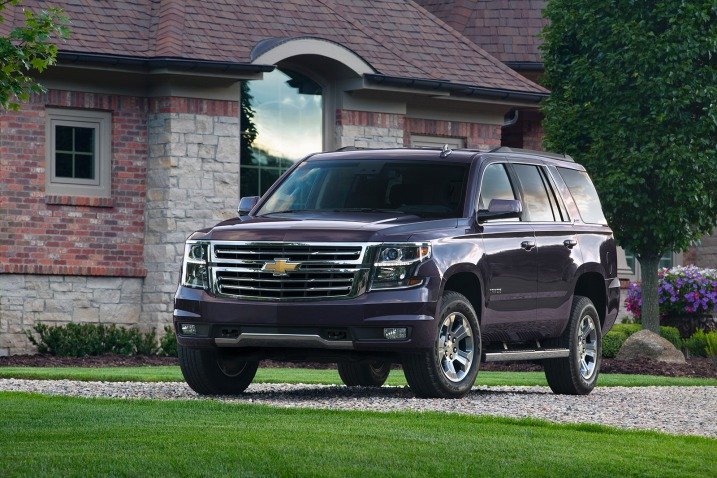 Perhaps one of the best large SUV’s on the market today, the Chevrolet Tahoe has been a stable in its class for many years. Boasting seating for up to nine and significant cargo space, the 2016 Tahoe fits the needs of almost any family looking for a large-capacity people-carrier. Undergoing a number of changes over the years, the Tahoe has changed with the times while continuing to fill its role as a large SUV almost perfectly. The exterior has gone through some tweaks and the interior has gotten even better over previous years. A number of high-tech optional extras are available and the standard equipment offerings are above-market standard.

The Tahoe’s 5.3L V8 is rated at 355 horsepower and includes the same cylinder deactivation technology as the above Yukon. Without the cylinder deactivation the Tahoe is rated at an estimated combined 18 mpg, a respectable amount for the vehicles size. The car itself drives admirably well but, like the Yukon above, some drivers may find it to be too large for their purposes. Regardless, the 2016 Chevrolet Tahoe is one of the best choices in the large SUV class today and deserves strong consideration by any buyer seeking to purchase a vehicle in its class. 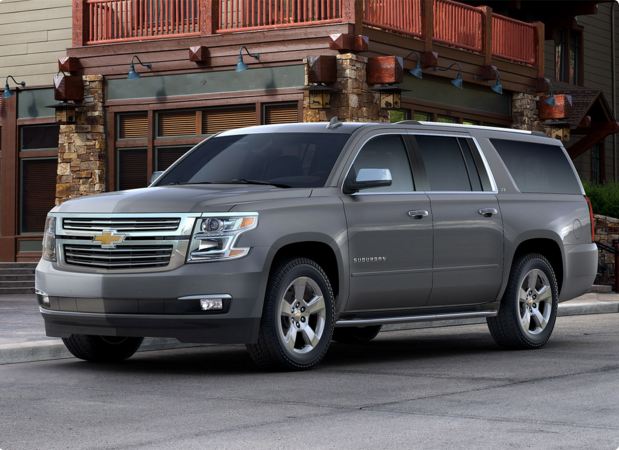 Competing with the GMC Yukon for the title of largest SUV on the road, the 2016 Suburban is a massive offering from Chevrolet that seeks to be crowned king of the large SUV class. The 2016 Suburban feels large in almost any setting, even when found among cargo-vans and large pickups, but thanks to some smart engineering by Chevy the ride itself is smooth and the handling is solid. A large 5.3L V8 is rated to produce 355 horsepower and keeps the Suburban moving along at a fair pace. This monster V8 is rated at an EPA-estimated combined 18 mpg.

Technology abounds in the interior with tons of optional extras. A 4WD option is also available for light off-road or undesirable weather conditions. The interior is incredibly comfortable, with seating for up to nine available as an optional extra, and even the back row is suitable to fit adults in for short trips. The suburban is one of the oldest brands in SUV’s still around today and despite its age, it continues to get better each year.

Thinking of buying one of these 9 passenger vans or SUVs? Already own one? Leave a comment and let us know what you think!