For those looking to buy a full-size SUV that can comfortably seat nine passengers without being a full-on commercial van, the list of options grows smaller each year. Front row bench seats have gone from being the standard across the industry to being thought of as a relic from the past. Fortunately, a handful of manufacturers still recognize the need for three rows of bench seating, with some even offering it as standard. Below is a list of the three best nine passenger SUVs that acknowledge the need for three rows of bench seating. 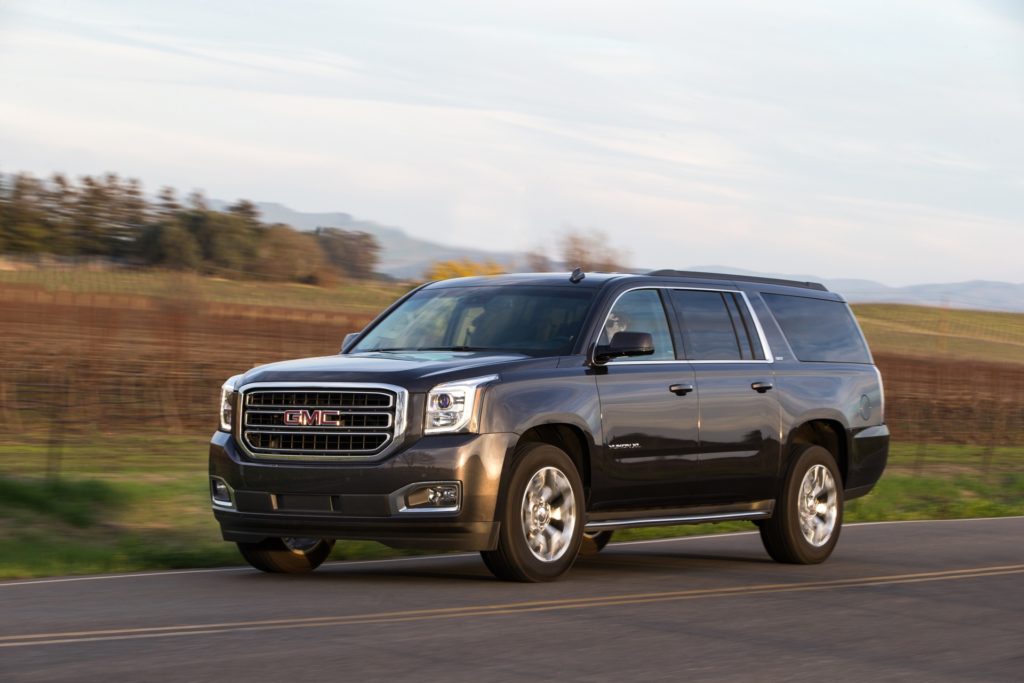 The 2016 Yukon is GMC’s premiere full-size SUV. Offered in several trims, including a long-wheelbase model and the prestigious Denali, the Yukon is meant to be big, powerful and comfortable.

It has one of the largest interiors of any vehicle on the road, with optional seating for up to nine when the front-row bench seat is used, and ample cargo space even with all three rows in use. The back two rows of seats can be folded down to provide additional cargo space, and there’s even a power-folding seat control on the rear hatch to aid in quickly adjusting space before loading. The third-row in the standard model can be a bit cramped for taller adults, but the long wheelbase model solves this issue and provides enough leg room for most trips.

The exterior resembles other full-size offerings from GM, solidly resembling old-school SUVs but with a touch of modernity. Riding in the 2016 Yukon is a quiet affair thanks to special attention being paid to noise dampening. The ride itself is smoother than would be expected from such a large vehicle, and while the standard suspension still lets a few bumps be felt when driving, an upgraded Magnetic Ride Control suspension is made available. On models with this feature the ride is as smooth as can be for the Yukon’s passengers.

As is common with GM vehicles, a large 5.3L V8 is included in the base model, while an optional 6.2L V8 is also made available. Rear or four-wheel drive are both available on all models, and the four-wheel drive handles particularly well in all-weather conditions. Both RWD and 4WD powertrains receive a respectable 18 mpg, while the larger 6.2L V8 gets 17. This is mostly thanks to GMC’s cylinder deactivation technology prominently featured in most of their vehicles these days, a feature that smartly shuts off half the engine’s cylinders to conserve gas when at cruising speed.

The 2016 Yukon is a heavy hitting full-size SUV and can even compete with Luxury SUVs when in its full Denali badge glory. 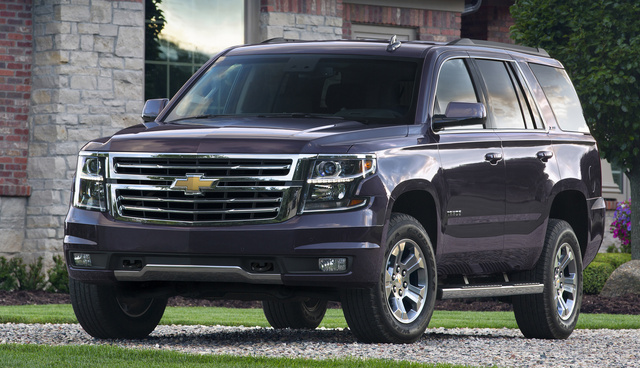 The Suburbans slightly smaller brother, the 2016 Tahoe is very much its own full-size SUV. It may have similar underpinnings as its GM relatives, but the Tahoe comes into its own with impressive, powerful styling and remarkable utility.

The Tahoe is the smallest of the three full-size GM SUVs with the exception of the base model Yukon, which is the same size. The same 5.3L V8 offered in the Yukon is the only powertrain option available here, with RWD and 4WD options both present. The same cylinder deactivation technology is also featured, allowing the Tahoe to get the same combined 18 mpg as the Yukon.

Inside the Tahoe up to 9 passengers can be seated in perfect comfort with the available front-row bench seat. Chevrolet has placed a strong focus on interior utility, and the attention shows. Storage bins, folding seats, and even a heads-up display are standard or available extras, as well as wealth of other useful features littered throughout the vehicle. Standard safety features are also numerous, with blind spot monitors, haptic seat feedback alerts for lane departure warnings and more available as options.

The ride in the Tahoe is similar to the Yukon, but even better thanks to more body strengthening. The same suspension is featured here, and once again the Magnetic Ride Control option is available and will provide a much smoother trip for passengers. The Tahoe does feel big on the road, but it handles its size well and doesn’t feel overly clunky despite its size.

While IIHS crash safety data won’t be available, the Tahoe has received four-star crash ratings in government tests. With all the body strengthening Chevrolet has done to the Tahoe, it’s an incredibly safe vehicle and holds up well under stress. At first glance, the Tahoe looks the same as it’s cousins, but on closer inspection it might just be the most unique of the three GM SUVs. 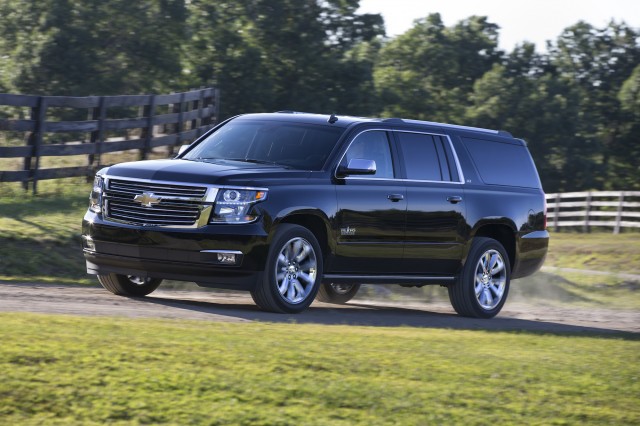 Like the above listed Tahoe, Chevrolet has focused on interior utility in the Suburban, and many of the same handy features can be found here. The third-row seat is even more comfortable than the Tahoe’s, sharing similar legroom with the Yukon but with even more headroom. All of the seats in the Suburban are incredibly comfortable, and with the Magnetic Ride Control suspension feature the Suburban practically glides across the roadway, though it still suffers from some body roll when cornering.

All the standard and optional safety features are present, with the same array of luxury and utility extras offered in the Tahoe. A fully loaded Suburban can easily compete with the Yukon Denali for the title of most luxurious full-size SUV. As with other GM vehicles, the Suburbans V8 engine has the same cylinder deactivation technology present in the Yukon and Tahoe, and gas mileage on the Suburban is identical at a combined 18 mpg in both the RWD and 4WD powertrains.

It’s worth noting that while the Tahoe and Suburban share more or less the same body structure and additional strengthening, the Tahoe performed slightly better in front-crash tests. The Suburban still received an overall 4-star crash rating from the government, however, and has the same class exclusive GM safety features. The 2016 Suburban is the Tahoe’s larger, more spacious older brother, but it shares all of the Tahoe’s strengths and ends up being one of the best full-size SUVs on the road today.