If you are in the market to buy an 8 passenger vehicle this spring, look no further than this list of the 5 best on the market, ranked and reviewed for you below. We’ve taken as much confusion out of review shopping as possible for you by only presenting the best of the best and highlighting their most notable features. 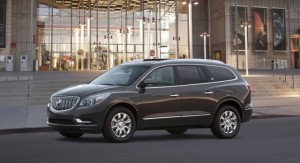 If you are looking for a smooth ride, strong fuel economy, and comfortable seating capacity to carry 8, then look no further than the 2013 Buick Enclave. This capable SUV delivers more luxury than its price tag suggests, and Kelly Blue Book agrees; they describe the Enclave as “offer(ing) excellent value in terms of space, amenities, styling and efficiency. It undercuts more expensive premium brands by thousands of dollars while still offering the luxury experience that premium-brand buyers demand.”

The 2013 Buick Enclave features a 3.6-liter V6 engine, fit to accommodate a full load, even while utilizing the third row seating. Reviewers across multiple sites commented that although the V-6 doesn’t make this SUV sporty, the engine’s power is more than sufficient for the most maxed-out ride. And who would mind, when this SUV averages a 17 city, 24 highway MPG fuel efficiency. The gas pump (and your wallet!) will think you’re driving a minivan, while you enjoy the comfort and utility of an SUV.

This luxury crossover vehicle also boasts a quiet ride, a notable distinction among its competitors, as well as a rearview camera system, a standard remote starter, six months of OnStar and 3 months of Sirius XM Satellite Radio included, as well as heated and cooled front seats, and optional articulating headlamps. The FWD Leather trim package is available starting from $42,460. It’s no wonder that its new baby brother, the 2014 Buick Enclave, just won the #1 ranking for Affordable Midsize SUV from US News and World Report. 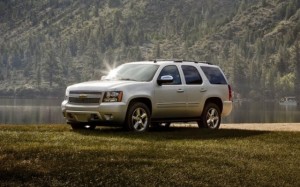 Drivers who face the extremes of winter elements, you have found your next car. The 2013 Chevrolet Tahoe promises pickup, power, towing capacity, a tight turning radius, seating for up to 9 passengers, ample cargo capacity, and a competitive standard warranty that includes roadside assistance. With a wealth of features, such as standard Bluetooth, satellite radio, and integrated USB port, and optional upgrades such as a nine-speaker Bose audio system, heated and cooled front leather seats, heated second row seats, heated steering wheel, optional rear DVD entertainment, and backup camera, you’d hardly realize you are also driving one of the safest SUV’s on the road, earning 5-star front and side crash test ratings by safercar.gov. If you think you have to trade fuel efficiency for all of these features, think again.

This pleasure-drive comes standard with a 5.3L V8 engine, with Active Fuel Management that settles this vehicle at 15 city, 21 highway MPG fuel efficiency. Not too bad, with all that hauling capability; the 2013 Chevy Tahoe is one of the few SUVs remaining that is built on a truck-based engineering platform.

The only complaint seems to be a burdensome process for laying the third row flat for cargo, and an “immense” capacity that is often unneeded by the average driver. But as a family vehicle, fit to haul-it-all, and available in six trims, the 2013 Chevy Tahoe has something to offer, all while delivering on overall style, functionality, and usability. The 2013 Chevrolet Tahoe LS is available at $39,830. 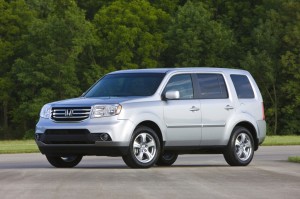 Are you surprised that this one makes the list? Believe it or not, the 2013 Honda Pilot affords room for 8 passengers, or 6 passengers plus long cargo (think skis here), or 5 passengers with a stowed third row. For the family on a budget, the 2013 Honda Pilot is well worth the look. Be warned, however, that this 8-passenger vehicle gets mixed reviews. While Kelly Blue Book and Consumer Guide both rate the Pilot thumbs up, Edmunds says look elsewhere. The biggest complaints by reviewers were sluggish acceleration, longer than expected stopping distances, and cumbersome city maneuverability. But if you are looking for absolute value with as many features as its comparable competitors, the 2013 Honda Pilot does not under-compete.

The 2013 Honda Pilot earns four out of five stars in its overall safety rating, with a significantly lower rollover risk than that of other SUV’s. In addition, the Pilot features multiple advanced safety features, including front and side airbags, side curtain airbags, and an active head restraint system. Overall, this family vehicle offers amenities that parallel the Tahoe, including rear DVD, voice-activated navigation, Bluetooth, USB, and rearview camera. Add to that a clean exterior styling and a no-fuss interior with plenty of storage nooks for family travel, and you just might find what you are looking for in an 8-passenger vehicle. The 2013 Honda Pilot is available for $29,520. 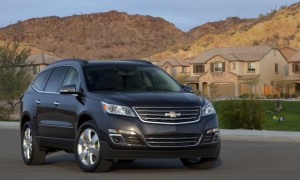 If you just can’t justify the Chevy Tahoe for size and towing capacity, but you’re looking for an 8-passenger crossover vehicle for around the town, take a look at the 2013 Chevy Traverse. The Traverse has been described by Car and Driver as a “minivan masquerading as an SUV,” and was built on the same platform as the Buick Enclave. Among its generation of SUV counterparts, the Traverse has been the best-selling, and offers a quiet and comfortable ride with unique safety features such as the innovative front center side airbag, which prevents driver and passenger from colliding during the event of a side-impact accident.

The Traverse also offers the exterior lines of a high-end competitor, with what US News calls “massive cargo room and solid fuel economy.” The 2013 model underwent significant restyling from its glitch-ridden predecessors, and now boasts comfortable seating throughout, even in the third row, and more than adequate power with its 281 horsepower V6 engine, and well-reviewed around-town handling. Available features and upgrades include BlueTooth, OnStar, USB port, HD Radio, a touchscreen display, 60/40 split-folding third-row seats, and additional Bose surround sound, rear seat DVD, and installed navigation system. The 2013 Chevrolet Traverse LS is available at $30,510. Check out the full review. 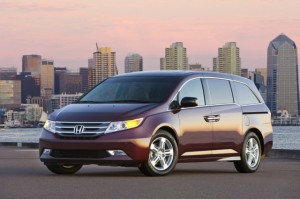 With seating for up to 8, the Honda Odyssey leads as the tried, tested and succeeded family vehicle. Perhaps most notable, almost every seat is universally described as “comfortable” by reviewers, and the Odyssey also entices with a large cargo area and an easy to collapse third row. If you’re a techie, this alluring minivan just might be for you, with multiple available upgrades and gizmos worthy of a ride with the Jetsons.

The most notable of the standard and available features include: Bluetooth, an integrated USB port, navigation, heated seats, a cooling console, backup camera, and a wide-screen rear DVD system. This easy cruising vehicle is also endowed with safety features, earning not one but two top government ratings, an award not often replicated among vehicles with this seating capacity. And, for families with young children, the 2013 Honda Odyssey allows for up to five LATCH-installed child restraint systems among its 8 passenger seats. The 2013 Honda Odyssey is also highly rated for handling, outward visibility, and reliability, and the mid-grade EX model is available for $31,825. Check out the full review.