The number of six passenger vehicles being sold today is staggering. Nearly every SUV, truck, and even some sedans can be equipped to carry you and five of your friends or family. But can they do it comfortably without sacrificing in other areas? That’s what we set out to discover.

Here are the 12 best vehicles that seat exactly 6 passengers in 2016. 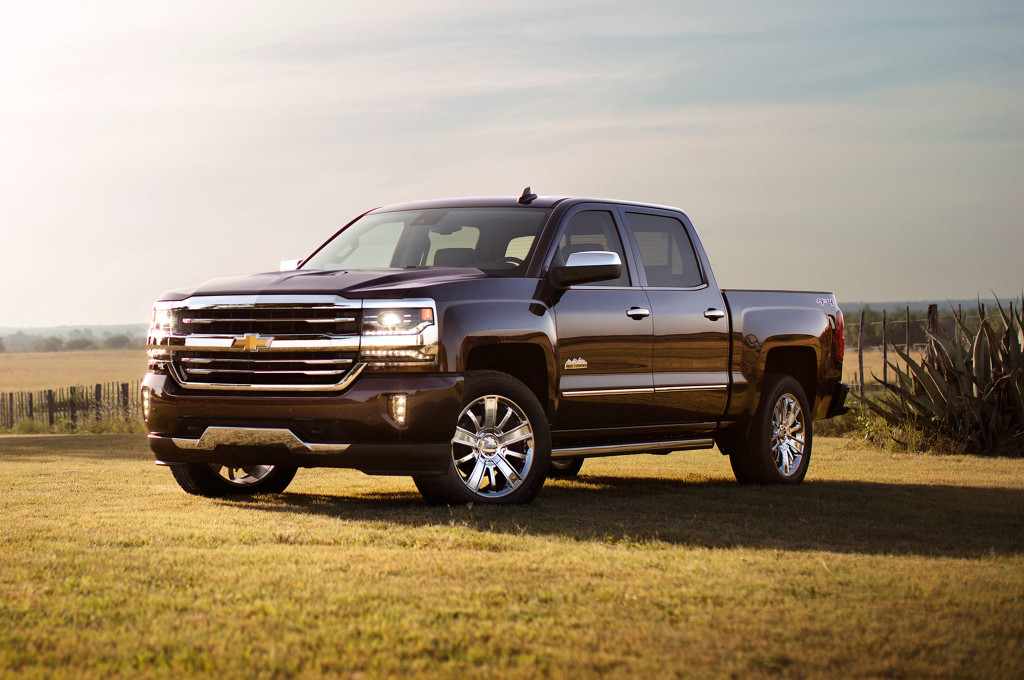 A heavy-duty light pickup that’s been positioned to take the best selling crown from Ford’s F-150 for years, the Silverado is every bit as good as Ford’s pickup line. For 2016, Chevrolet has reworked the Silverado’s exterior, giving it a more solid and hefty appearance.

Available with seating for up to six, the Silverado’s second row provides plenty of room for adult passengers to sit comfortably. It also has one of the best and smoothest rides in terms of passenger comfort. The Silverado effortlessly glides over bumpy or uneven road surfaces while keeping everyone inside in perfect comfort. As is common with American made pickups, the Silverado has a long list of standard and optional amenities.

Both engine options for the Silverado come with a significant amount of hauling power. The base model 4.3L V6 is rated at 285 hp and 305 lbs-feet of torque, enough to give the Silverado plenty of acceleration while under load. The available engine is a big V8 rated to haul up to 12,000 lbs, one of the highest in its class, and both engines are available with cylinder deactivation for added fuel savings.

In 2016 the Silverado is once again an excellent competitor to Ford’s powerhouse F-150, and discerning buyers will have trouble picking between the two for their light pickup duties. 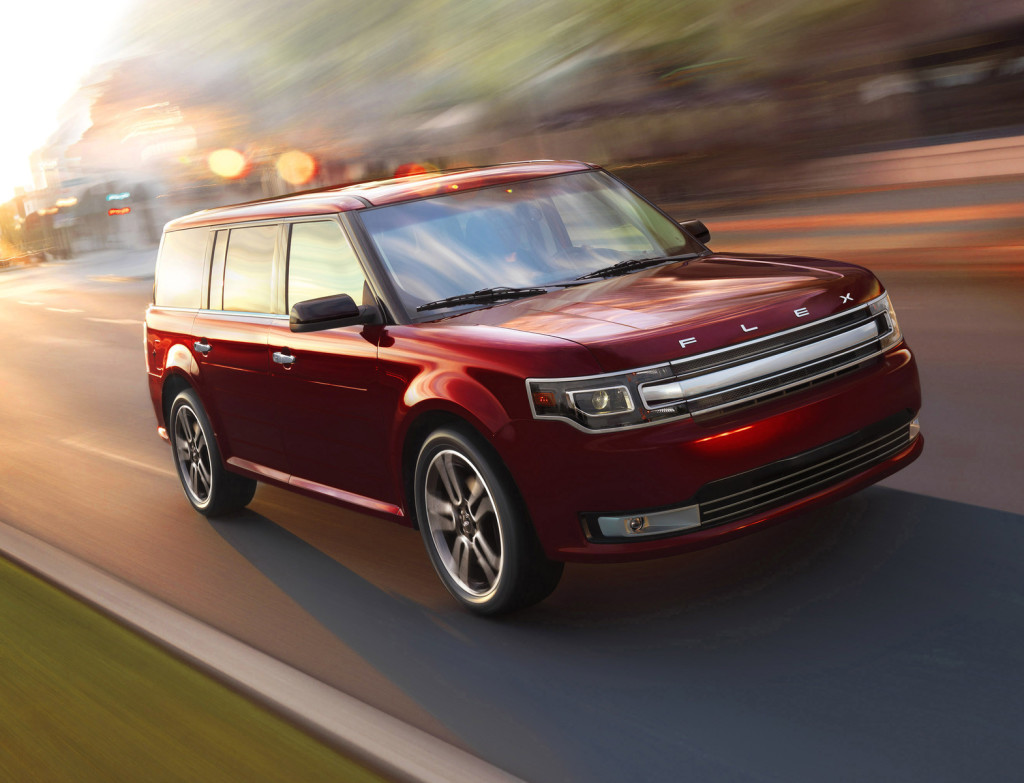 One of the most exciting SUVs of 2016, the Ford Flex has a unique exterior design inspired by station wagons of old but remains ahead of the pack in many areas despite its throwback origins. Passenger accommodation in the Flex is fantastic, and there is plenty of room in the second row for adult passengers and the seats themselves are very comfortable in both the front and back.

The engines offered in the Flex are all strong options, and even the base model’s 3.5L V-6 is ahead of its class in terms of performance. The real highlight is in the turbocharged V-6 which will provide driving enthusiasts with a lot to like in its road performance. Driving in the Flex is a great experience too, as the deceptively large SUV turns like a dream with responsive handling and good weighty steering.

The Flex’s greatest feature may also be its most controversial; its external design stands out and looks boxy or unrefined in today’s market. That’s really its biggest strength, providing extra interior space in all the right places. It allows the Flex to fit in a usable third row – an amazing feat in a compact crossover.

If you can get over the Flex’s “unique” styling you’ll find a fantastic compact crossover that many vehicles have trouble matching up to. 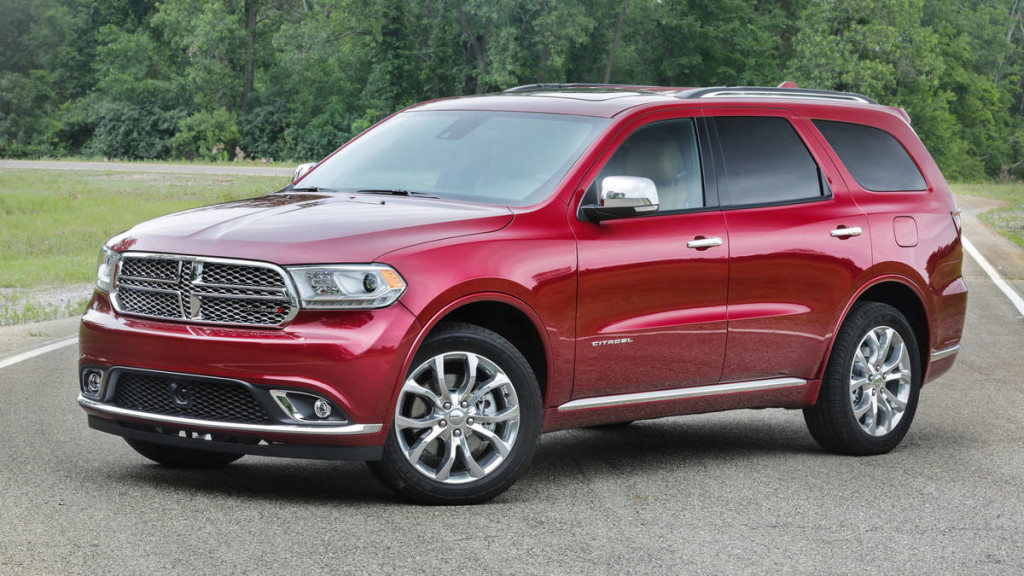 The Dodge Durango has undergone a number of redesigns in recent years, shifting its focus from a rugged SUV to compete with the SUVs of old to the refined and composed Durango seen today. Dodge has struck a wonderful balance between people carrier and rough off-road performer, offering all the inside comfort and quality today’s SUV buyers expect to see, but also letting its drivers get a little rough with its flagship SUV.

Either engine option is a good one. Starting with a 3.6L V6 putting out 290 hp even the base model Durango has enough zip for everyday driving and enough muscle for light hauling. The optional 5.7L Hemi V8 has a hefty 380 hp and can compete with the bigger full-size SUVs for hauling capabilities. Both engines are mated to an 8-speed automatic gearbox and have fuel saving features – stop/start technology and cylinder deactivation for the V6 and V8, respectively.

A massive interior rounds out the package here, with third row seating that’s usable by adults, if a bit hard to access in the second row bench configuration. All the luxury upgrades are present here as well, and a fully loaded Durango could be mistaken for a luxury SUV on the inside.

Powerful workhorse meets family friendly commuter, the Durango’s 2016 model deserves a serious look by anyone interested in an SUV. 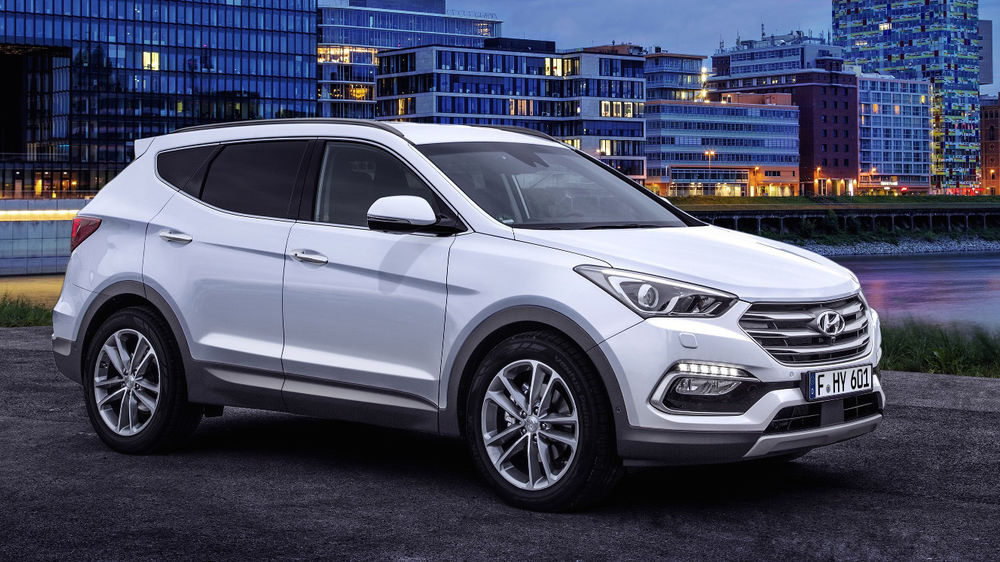 Featured here in the Limited edition trim for the Santa Fe line, the 2016 Santa Fe provides an option for consumers who’d like to strike a balance between sheer utility and family commuter. Its given a strong V-6 as its base engine with more than adequate acceleration and even some light hauling capability.

Seating for Seven is standard, with the third row being a bit cramped for adults but just fine for children. Drivers will enjoy the Santa Fe’s easy driving experience with steering that feels weighty without being too heavy. The ride quality in the Santa Fe is nice and quiet, and as is becoming common with Hyundai manufactured vehicles all the usual luxury accommodations are available here as optional extras. A Santa Fe Limited with all the bells and whistles will compete with American SUVs at a similar price point.

The Santa Fe is offered with both FWD and AWD, but the AWD system is best used for nasty weather and is not meant to be an off-road tackler. It also has a significant impact on fuel efficiency that should be taken into consideration before upgrading.

Hyundai has produced a well-rounded SUV in the Santa Fe, and one that should get a second look by families looking for a less traditional SUV brand.

Another massive pickup truck with seating for six, the Ram 1500 brings Dodge size and power to the table. It might just have the smoothest ride of any pickup in its class, and is equally at home as an everyday commuter or rough and tumble workhorse. Strong, lightweight construction helps the Ram 1500 in both fuel efficiency and long term durability, and a lengthy list of optional extras can take the base model Ram 1500 from a workhorse pickup to a luxury truck.

A range of engine options help tailor the Ram 1500 to its owners needs, starting with a base model 3.6L V6 with 305 hp. There is a big optional V8 and a fuel efficient V6 turbodiesel that gets some seriously good fuel efficiency numbers. All engine choices fuel consumption is aided by the Ram 1500’s strong but lightweight frame. An optional air suspension is available, but it can create a bumpy ride at highway speeds.

As a people carrier, the Ram 1500 has two options. The smaller Quad Cab model, which offers less room for passenger comfort in an overall shorter vehicle and the much larger Crew Cab. The Crew Cab will sit its second row occupants in perfect comfort but may be too large for a standard garage.

Dodge’s Ram 1500 is yet another strong competitor to the Ford F-150’s best selling crown, and while it may not have gotten the raw sales numbers that Chevy’s Silverado has, it’s still worth more than a passing glance for truck shoppers. 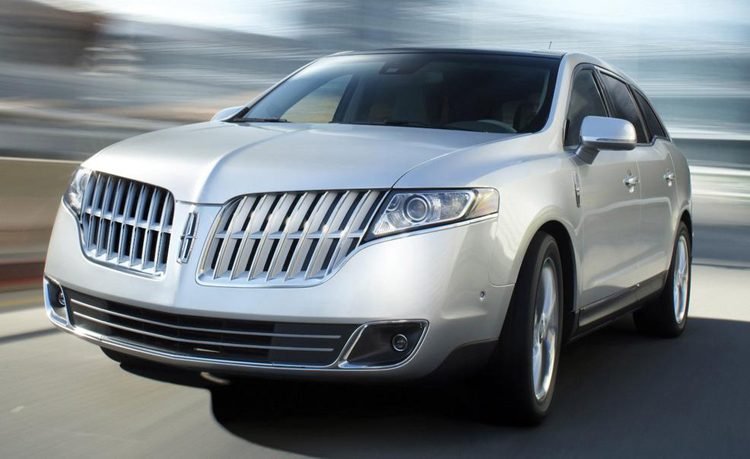 With a sleek back look that has once again undergone a redesign, albeit a small one, the 2016 Lincoln MKT is a luxury SUV option that stands out from the rest of the crowd, for good or for ill. The looks fall into the “love it or hate it” category, with fluid and slick lines that taper in the back. It could be described as hearse like at the right angle. Underneath the sleek exterior are the same underpinnings as the Ford Flex, making the Lincoln MKT a smart and functional SUV.

Two powertrain options are available on the MKT: a 3.7L V-6 with FWD and a turbocharged V-6 with AWD. Both are paired with a 6-speed automatic and like the Flex the turbocharged V-6 is really the standout here. It’s faster, gets better fuel economy, and handles everyday driving better than the base model engine. That’s not to say the base model V-6 is a slouch either, but the turbo V-6 will appeal to drivers who want more pep in their SUV.

The MKT is meant as a spiritual successor to the now discontinued Town Car, and the available extras highlight this nicely. Lincoln is a luxury brand and buyers willing to pay extra will get all that title entails. The MKT can be fully loaded with every luxury feature under the sun, and even the base model is well equipped right from the get go.

There’s also loads of cargo and passenger space in the MKT, with a third row that is actually usable but hard to access. The ride quality is fantastic and the MKT handles like a much smaller vehicle.

The MKT is a luxury SUV meant to embody the essence of the class, and buyers not dissuaded by the vehicles extreme styling will find a lot to like in the 2016 MKT. 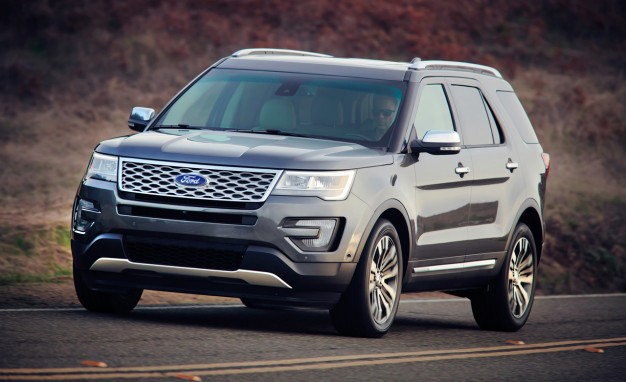 Another SUV that has evolved from straight utility to a smart balance between rugged utility vehicle and family friendly people carrier, the Ford Explorer has come a long way from its old roots as one of the original SUVs. Gifted a number of refreshes for the 2016 model year, including new styling, new engine options, and a more commuter friendly suspension, the 2016 Explorer represents one of the best options in its class for those who want a family SUV that doesn’t compromise on utility.

A 3.5L V-6 is the standard base model engine, with an available turbocharged inline-4. Both engines feature a six-speed automatic transmission and come with FWD as standard with AWD optional. The optional turbocharged 4-cylinder gets the nod here, with better efficiency and faster acceleration. As is traditional for Ford Explorer’s, the steering is responsive and quick, with average handling for its class and a smooth ride. The trade off comes in off-road performance, and while the Ford Explorer can tackle some light off-roading, it’s not the Explorer’s strong suit.

The family friendly focus is apparent for anyone who sits in the Explorer’s second row, which has plenty of room for all but the tallest adults. As per usual with mid-size SUVs, the third row is best reserved for children.

The Ford Explorer is often the first vehicle that comes to mind when people picture an SUV, and there’s good reason for that. Ford once again brings a well-rounded SUV to the mid-size SUV class.

The Tundra stands in a field of traditionally powerful and competitive options from the likes of Ford, Dodge, and Chevrolet. For 2016, Toyota hasn’t changed much or worked to upgrade the Tundra to closer to its rivals in some key areas, but thanks to legendary Toyota reliability and durability it still provides a viable pickup option for anyone seeking a workhorse pickup.

Good V8 engine options start with the standard models 4.6L V8. This engine provides adequate power for everyday driving but falls a bit short when compared to more muscular options its class rivals bring to the table. This is partially made up for in the Tundra’s great ride quality and handling, and Toyota offers the Tundra with a long list of interior and exterior options to round out the pickups utility.

Multiple configurations are offered, including a Double Cab and the Crew Max options. The Double Cab will get a second row seat but lacks overall passenger room, while the Crew Max gives plenty of room for its second row passengers. The Tundra’s interior also falls short compared to the higher quality materials used on domestic trucks.

By virtue of its reputation as a reliable automotive manufacturer the Tundra scores major points for its rugged durability, but it does lack in a handful of key areas when matched against American pickups.

Best 6 Passenger Vehicles of This Year