Mazda has been producing and manufacturing the CX-9, a mid-size crossover SUV, since 2006. They’re back at it again in 2017 with some new features. How does this model compare to previous iterations of the CX-9? More importantly, how does this vehicle compare to others in its class? Let’s take a look at some of the key features, configuration options, and pricing to find out. 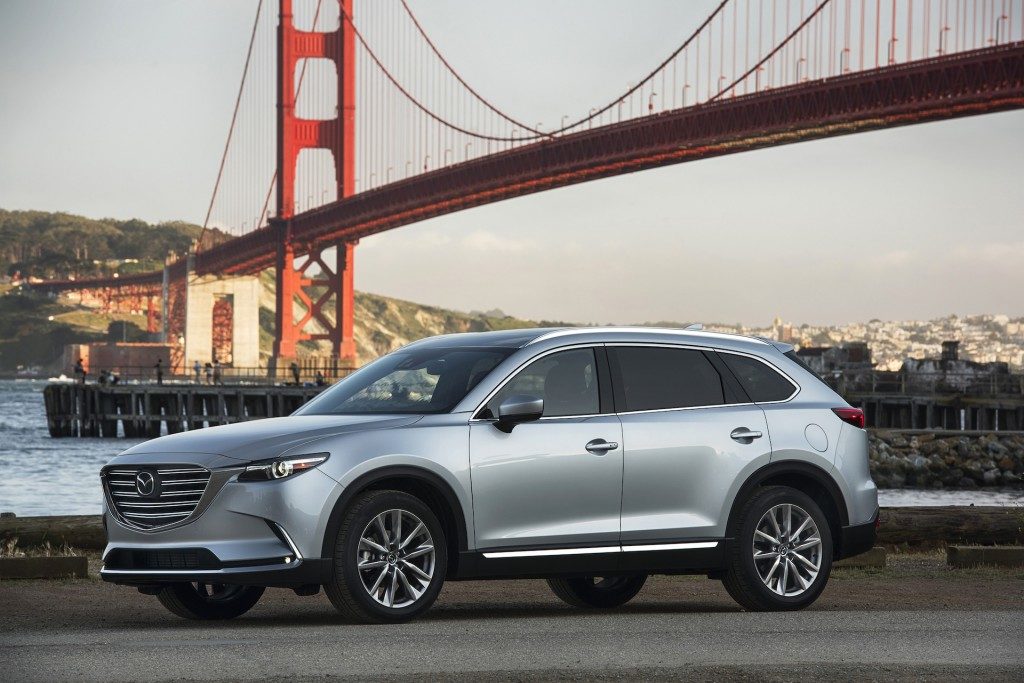 The Mazda CX-9 features three rows of seats. While this is handy for large families on the surface, a vehicle of this size class doesn’t get away with that design choice very easily.

To put this into perspective, the full-size, 224-inch-long Chevrolet Suburban also features three rows of seats, but it is strongly recommended that only children or very short adults sit in the third row for long periods of time, as discomfort can arise for taller individuals need more leg room. This is in a vehicle that is, as mentioned, over 18 1/2 feet long.

By comparison, the CX-9 is only 199 inches long, or 16 feet, 7 inches. This makes leg room an issue for not only the back row, but even the second row. In addition, having three rows of seats in a vehicle of this class means that there is hardly any room between the third seat and the back of the vehicle for storage space.

Furthermore, unlike other vehicles, there is no way to fold the third row flat, since there simply is not enough room to do so. In short, while this vehicle can technically seat up to eight people, it is not recommended that you do so for long trips.

Honestly, the correct answer to that question would be “Not much.” However, that isn’t necessarily a bad thing. The CX-9 has always been the Créme dé la Créme of Mazda’s SUV lineup, and this year’s model is no exception. It boasts the same sporty design, luxurious leatherette/vinyl interiors, and attractive dashboard with optional 8″ touch screen infotainment center as the 2016 model, with the only notable change from 2016 to 2017 being the inclusion of low-speed automatic braking on the Touring model.

In terms of performance, one might think this crossover has no “get-up-and-go”, what with its seemingly meager four-cylinder engine, but fear not. This engine is turbocharged, giving it an impressive (for its class) 310 lb-ft of torque and 250 brake horsepower. This allows the CX-9 to, in some cases, actually outperform some of its V6 rivals while also allowing for potentially better fuel economy (more on that later).

The six-speed transmission certainly doesn’t hurt matters, either; most other vehicles in its class have a nine- or ten-speed transmission, causing uncomfortable and constant gear shifting that is pretty juttering to drivers. There’s even a customization option on Mazda’s website for 20-inch tires, but this is generally not recommended unless the pavement you typically drive on is particularly smooth.

Considering its price point, the interior design of the Mazda CX-9 does not disappoint. There’s a healthy mix of brushed aluminum (or at least faux-aluminum), matte plastic, and, in some configurations, real rosewood in the front. This makes for an interior that features touches of class usually only found in luxurious, more expensive vehicles. It’s a nice touch, but as you’ll see below, that beautiful form lacks some much-desired functionality.

The center console will feature an infotainment system in all models, but there are two configurations: a 7.0-inch model and an 8.0-inch model. Only the 8-inch model features a touchscreen; the 7-inch model must be controlled with a set of knobs on the console. Many users are also saying that the 8-inch screen is more responsive with brighter colors and crisper images, but your mileage may vary in that regard. This console grants you access to iPod and Bluetooth streaming, the radio, and… that’s about it.

No CarPlay, Android Auto, or Siri-in-the-Car here. Unfortunately, Mazda simply hasn’t made the list of partners for mobile developers yet, so you’ll want to go with an option from the likes of Ford, GM, or Toyota if you’re expecting those kinds of features. However, the system does allow access to a rear-facing camera even in the base model, so that’s a plus in comparison to some other models in its class.

While the 2017 model has not yet been tested by J.D. Power & Associates, the IIHS, or the NHTSA, the chassis and general build quality are very similar to that of the 2016 model, which rank very highly among safe vehicles. This is likely due to automatic braking features, a rear camera system. and stability control available on every model (with the exception of auto-braking, which is only available on . This is fantastic, as other vehicle manufacturers will charge extra for these features.

Thanks to that relatively powerful, yet efficient, turbocharged four-cylinder engine, the 2017 Mazda CX-9 boasts some of the best fuel economy available in its class, with an EPA rating of 22 city and 26 highway miles per gallon–with its Sport mode (or Turbo mode, depending on who you ask) turned off. This means that, while you won’t be outputting the full 250 horsepower and getting that fuel economy simultaneously, this is a decently efficient vehicle to drive around the city, despite its class.

Even during longer trips, one could argue that the choice between more performance and more efficiency is a nice option to have, and one that many other models in this class wish they had.

The Sport model starts with a base price of $33,320 and already contains most of the features outlined above, with 18-inch wheels, the 7-inch infotainment system, and all safety features except auto-braking.

The Touring model, starting at $37,770, adds a hands-free lift gate, heated side mirrors, the 8-inch touchscreen infotainment system, and a higher-quality six-speaker audio system to its list of features.

Finally, the Signature model comes in at $44,015 and gives you the best of the best, including a real rosewood dash, Nappa leather-trimmed seats, and LED lighting accents overhead and around the grille.

Summary
If you have a lot of children and are looking for a vehicle with a lot of premium features without quite the premium price, and can deal with the less-than-optimal amount of space offered by that third row of seats, the Mazda CX-9 is a solid choice.

Thinking of buying a Mazda CX-9? Already own one? Leave a comment and let us know what you think!