The Ford Flex has been a popular go-to full-size CUV since 2009, when it replaced Ford’s Taurus X and Freestyle. Noted for its one-of-a-kind, Peter Horbury-inspired design philosophy (that people love to hate and hate to love) and roomy, high-quality interior, is the new 2017 iteration worth the $30,000+ Ford is asking? Let’s find out. 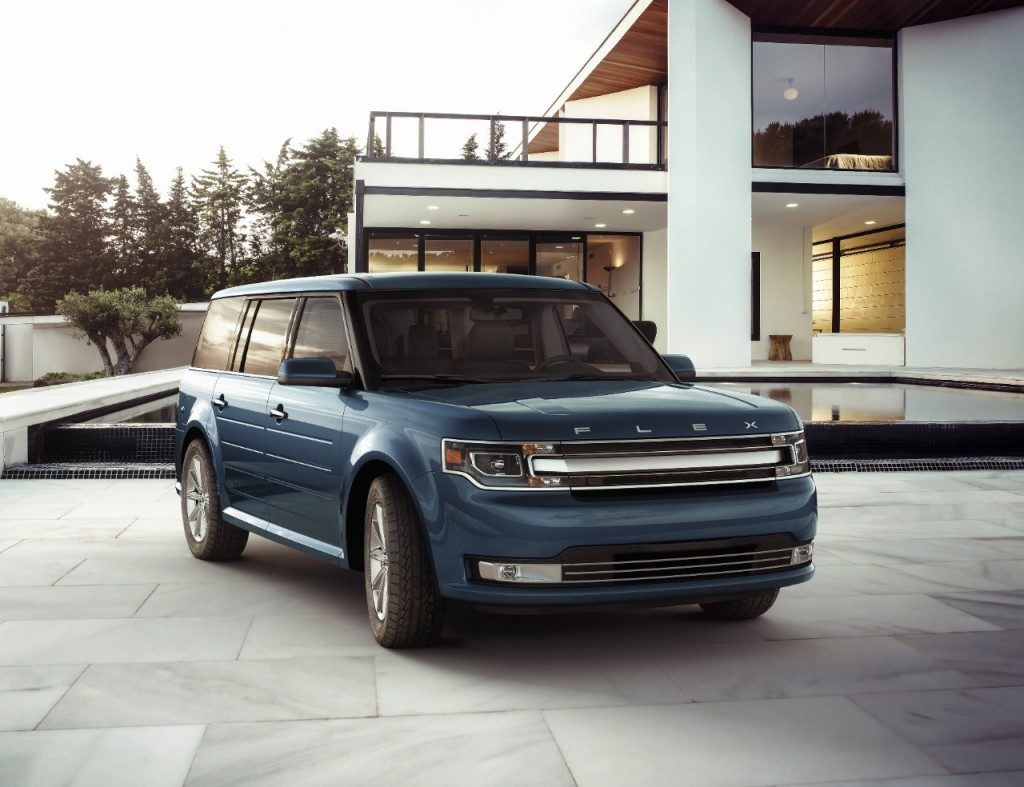 While the third row of seating is adequate (and certainly better than some other vehicles in this class), it’s not a bench seat, and because of Ford’s decision to prioritize the first two rows, still feels a bit cramped. Still, a family of eight (the highest number of people the Flex is rated to carry) typically consists of children as well as adults, and the third row is more than capable of seating the young ones comfortably.

Like most of Ford’s other vehicles this year, the short answer is “not much”. The styling of both the outside chassis and the interior itself are identical to last year’s model (with one exception; more on that in a bit), as are the engine options (and thus the fuel economy).

A few minor tweaks to the interior have been made, including slightly higher-quality vinyl seating with a more matte finish than normal–perhaps a smart decision, as it may prevent reflective sun rays from heating up the seats too much in summer weather.

Additionally, the center console has been rearranged and reorganized (likely to make way for Ford’s new and improved implementation of their SYNC infotainment system). Other than those minor features, though, this year’s Flex iteration is largely the same vehicle that it was last year.

Like its predecessors, the 2017 Flex offers two different V6 options: a standard V6 capable of producing 288 brake horsepower, and a turbocharged EcoBoost version with 365 horsepower that certainly gives more punch to this full-size CUV than one might imagine, but still doesn’t make it outright quick. Both engines come with six-speed automatic transmissions, but the turbocharged version includes a couple of paddle shifters for those skilled drivers who want a bit more control (and fun).

Be aware, though, that the EcoBoost engine never comes standard, and is only available as an add-on to the already-premium Limited model. This engine is also the only way to configure an all-wheel-drive Flex on Ford’s website. This could be disappointing for some, as many people would likely rather have the improved engine without all the other features (and cost) the Limited model adds.

A person’s sense of style is, by definition, a matter of personal preference. That said, there is no denying that, for better or for worse, the Ford Flex has always made a striking appearance among most other CUVs with its boxy, angular sides and semi-polygonal interior that does at least offer plenty of room in relation to its actual size.

The Ford Flex offers enough room to seat eight people and hold 20 cubic feet of cargo, all at the same time. That’s pretty impressive for a crossover (even a full-size one). Possibly even more impressive, however, is the fact that the internal angles allow for more leg room in the second and third row of seating than one might otherwise expect from a vehicle this size. In fact, the seating of the Flex is considered by some to be more comfortable than that of the likes of the Chevrolet Suburban and Ford’s own Expedition, both of which are nearly two feet longer than the Flex.

It should also be noted that the second and third rows of seats both have power folding mechanisms that allow them to fold out of the way for extra cargo if necessary. This brings the total potential cargo space to over 83 cubic feet.

Like many of Ford’s vehicles, many of the features included with the Flex will vary wildly depending on how much of your hard-earned cash you’re willing to shell out. As mentioned before, Ford is now implementing their third iteration of their SYNC infotainment center. This feature is certainly improved over previous editions, offering more modern features like Apple’s CarPlay and Android Auto…except when it doesn’t. Ford has decided that, for the Flex, you’ll need to step up to at least the SEL edition to obtain these features. At least iPod, smartphone, and Bluetooth tethering and streaming (as well as USB and headphone inputs) are available on all models.

As mentioned before, the seating has gotten a nice upgrade. The seats themselves are still vinyl, but with a matte, anti-reflective, slightly textured surface. This is a smart move, as it offers the feel of vinyl or leatherette seats while also helping to prevent luggage from sliding around or seats from becoming too hot or cold in the summer and winter, respectively.

While government validation has yet to be done on the 2017 Flex, it’s safe to say that you can expect similar levels of safety to last year’s model. That is to say that, while general safety tests come out quite positive, some improvement could still be had in situations where the vehicle ends up rolling. This is a common weakness among taller, full-size SUVs/CUVs, and is no more concerning here than it is elsewhere, but it’s’ still something of which you should take note, especially if you’ve never owned or driven a vehicle of this class before.

Six airbags and antilock brakes comes standard on all Flex models, as well as torque vectoring (allowing for smoother turning) and stability control. Unfortunately, the safety features end there for all but the Limited model, which includes a rear-facing camera and cross-traffic alert. Adaptive cruise control and front-facing collision detection are available, but in a move that would rightfully frustrate anyone wanting the utmost in safety, these features are only available as an add-on package, and ONLY for the Limited model.

Like many other vehicles in Ford’s lineup (especially those in the SUV/CUV classes), the base price for the SE configuration(in this case, $30,025) is reasonable, and represents good value for an effective family vehicle to take on road trips and vacations, and little more. However, once you start customizing the Flex with add-ons and bonus features, be prepared to pay for them in a big way.

The SEL comes in at $32,730, which is still reasonable value. That extra money gets you SYNC 3 (with Apple CarPlay and Android Auto), heated front-row seats, and 18-inch painted aluminum wheels (as opposed to 17-inch wheels on the SE edition).

The Limited model is where configurations start to get pricey quickly. It starts at $38,230, and comes with perforated leather seating, the additional safety features listed above (cross-traffic warnings, a rear-facing camera, etc.), and upgraded 19-inch wheels. However, this is the only model where all-wheel drive, the EcoBoost engine option, and additional safety packages can be configured. Once those add-ons are selected, this model of the Flex exceeds $50,000, which borderlines the prices of many luxury models.

While you may or may not like or love the design, one cannot deny that, at least in terms of the SE and SEL configurations, the 2017 Ford Flex is a great value for anyone looking for a solid family vehicle capable of hauling large families with a lot of luggage without a hitch and with performance to spare. Those looking for a lot of bells and whistles might consider looking elsewhere to save some money, but the utilitarians among us will love the Flex immensely.

Thinking of buying a Ford Flex? Already own one? Leave a comment and let us know what you think!