The Ford Explorer has been a popular choice as a combination full-size SUV and Crossover since its inception in 1995. This year is likely to see little to no change on that front, as Ford is making some much-appreciated changes to its 2017 iteration. Is it really a good buy, though? Let’s take a look at some of the features of this crossover and find out. 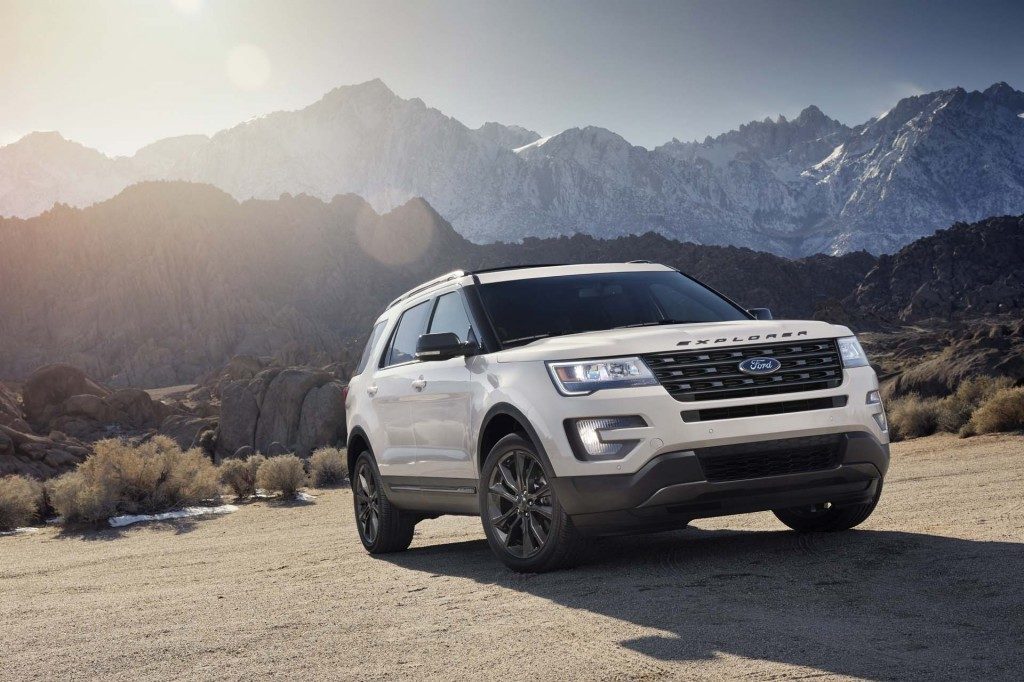 The 2017 Ford Explorer comes standard with three-row seating for 7 passengers and has optional captain’s chairs which reduce the seating to 6. Like most other three-row SUVs in this size class, suffers from the same “this third row of seats is designed solely for children” problem.

However, this is magnified even more by the fact that even the second row is a bit lacking when it comes to legroom. Hopefully, the adults you plan to have sit in the back are short, or they’ll need frequent stretch breaks on longer road trips. Additionally, fans of cloth upholstery will be happy here, but fans of leather or vinyl seats will be shelling out for the Limited model if they want that option.

Under the hood, the 2017 Ford Explorer allows for three different engine options depending on your configuration: a 2.3L EcoBoost I4, a 3.5L Duratec V6, or a 3.5L TT EcoBoost V6.

The 2.3L EcoBoost I4 may not sound too impressive on paper, especially for a vehicle of this class, but keep in mind that Ford’s EcoBoost engine is turbocharged, and is very similar to the engine offered in the base configuration of their Mustang. It outputs 280 brake horsepower (that’s an impressive 121.7hp/L) and 310 lb-ft of torque.

The 3.5L Duratec V6 option is actually the least expensive, as it is also the least efficient on offer here, and has been available since 2011. It outputs only 10 more horsepower than its little brother, at 290. This still isn’t bad, and results in 82hp/L output, but it’s clear that this is the budget engine. Additionally, the general feeling of “oomph” from this engine will be lacking a bit, since it only produces 255 lb-ft of torque. Still, this engine has proven to be a solid, reliable option, and is perfectly fine for those who don’t want to spend the extra money on the more efficient engine up front.

Finally, though, there’s the 3.5L EcoBoost V6. This turbocharged engine will definitely give the Explorer a pep in its step, outputting 360 bhp and 350 lb-ft of torque. This means that, although this vehicle isn’t really designed for it, this particular engine could allow the vehicle to navigate rough terrain more efficiently than the other engines on offer. Additionally, it should still prove to be relatively fuel-efficient thanks to its turbocharger. You’ll pay a pretty penny for this option, though.

In short, it’s nothing to write home about unless you get the more expensive configurations. As mentioned, the seats are cloth, which is fine, but the colors and molds throughout the cabin are generally dull and understated. This makes for a decent utilitarian approach, but those looking for something with a little more flare might want to look elsewhere.

Siri-in-the-Car, Satellite Radio, and iPod/Bluetooth streaming, and can either be controlled through the responsive capacitive touch screen or even by voice control. It’s a nice touch to have standard, and being able to communicate with both Android- and iOS-based devices right out of the box is always a welcome feature.

All of this is paired with a six-speaker audio system set up in surround, even in the standard configurations. This makes for one of the most enjoyable audio experiences among vehicles in this class.

Other features that come standard are Ford MyKey, USB input (although only one port is available), and a rear-view camera.

While 2017 ratings are yet to be released for a lot of vehicles, the structural design of the Explorer hasn’t changed much (if at all) in recent years, and the 2016 model scored five out of five stars in all areas of federal testing except one: rollover testing, which scored four stars.

This is typical for this class of vehicle, however, as it’s a tall-riding SUV, meaning it is affected more by wind, sharp turns, and inclement weather than many other vehicle classes. Needless to say, the four-star rating is less to do with Ford in this case, and more to do with the class of vehicle.

Still, it would be nice to see more initiative in the market in general go toward finding ways to balance the weight better in these form factors. Needless to say, however, this is one of the safest full-size Crossovers on the market.

Ford offers five base configurations for the Explorer, and most of the differences in the base configurations on Ford’s website come down to the engine. The base model, starting at $31,660, comes with 18-inch painted aluminum wheels, the 3.5L Duratec V6, and most of the creature comforts outlined above. The 2.3L EcoBoost option is also available, and for only $495 extra, is a viable option, netting you some extra fuel economy thanks to the turbocharger (17 city and 24 highway mpg for the V6; 19 city and 27 highway mpg for the I4).

The XLT model starts at $33,775 and adds LED signature lighting and LED fog lights to its list of amenities, as well as a reverse sensing system. The engine is the same V6 as the base model, with the 2.3L EcoBoost once again being optional.

The Limited model sees a considerable price hike to $41,675, but adds the voice-activated navigation system (SYNC systems in the lower models are not voice-activated and do not come with navigation), an amazing 12-speaker Sony audio system with Dolby 7.1 Surround, and genuine leather-trimmed seats. Additionally, it comes standard with the 2.3L EcoBoost engine, with the standard V6 still being an option if you want to save a few bucks.

The Sport model starts at $45,355 and comes with all the features of the Limited model, but includes the 3.5L EcoBoost V6 engine, “sport-tuned” suspension for better off-road situations, and upgraded 20-inch aluminum wheels.

Finally, the Platinum Edition comes in at a whopping $53,235, and upgrades the audio system even more, to a 500W Sony audio system. It also features Nirvana full leather seats with quilted inserts and a twin-panel moonroof.

Summary
The Explorer is an exceptional “jack of all trades; master of none” SUV. It starts at a reasonable $31,000 and comes with some great standard features. In traditional Ford fashion, there are lots of configuration options, and thus the ability to spec it out to be a truly luxurious vehicle if you’re willing to spend the money for it. The SYNC system is generally great, and it’s one of the safest vehicles in its class. If you can deal with the cramped seating and the less-than-stellar fuel economy (if you don’t go with the 2.3L engine option), the 2017 Ford Explorer is a great all-around family vehicle.

Thinking of buying a Ford Explorer? Already own one? Leave a comment and let us know what you think!