Minivans have been around for a long time, and they have been a family favorite since they hit the market because of the safety and size they offer. Chrysler’s 2017 Pacifica aims to please and meet the demands of family-minded consumers. When it comes to hauling people, it leaves some of its competitors in the dust. 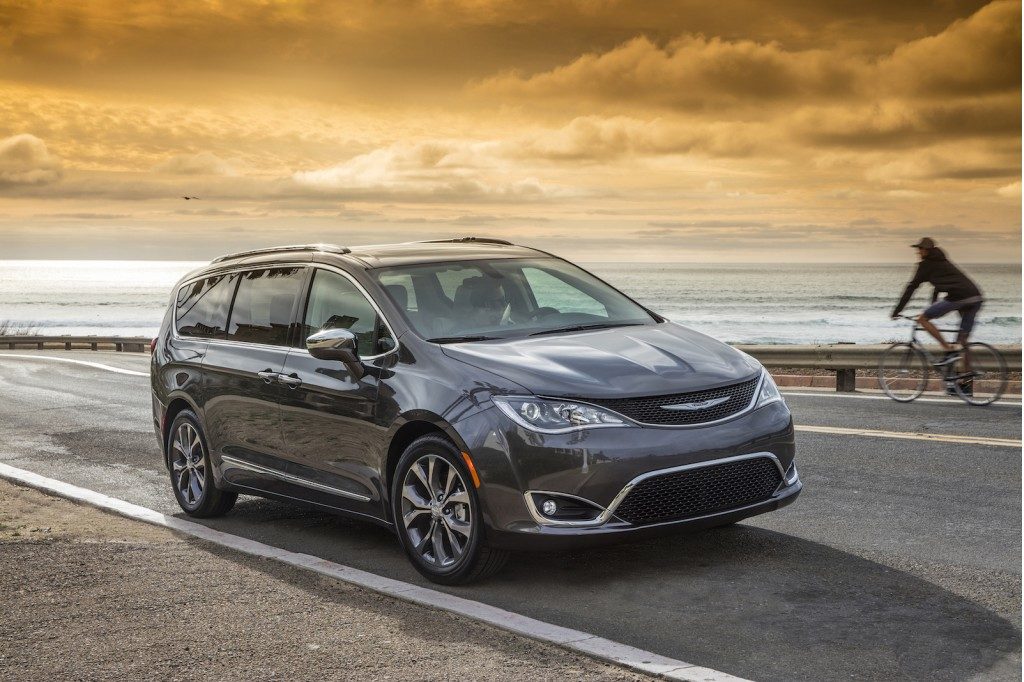 Standard options allow for seven people seating, but this number can be increased to eight if the bench option for the second row is chosen. These seats also feature Stow n Go technology, meaning the third-row seats fold into the floor to make the trunk larger.

Unlike with other minivans, Pacifica’s second-row seats also have the Stow ‘n Go feature, meaning the second-row seats do not have to be removed from the vehicle completely to maximize cargo room. Needless to say, this vehicle is a giant as far as cargo goes, boasting a total 197.3 cubic feet.

Base models come with cloth upholstery, but top-notch trims and Nappa leather are also options. The interior also makes for a quiet ride as the interior blocks out much exterior noise.
Consumers looking for an easy way to clean the Pacifica will be pleased to know that it has an option for Stow ‘n Vac technology, too. There is a vacuum built into the second row, and it has a 24-foot hose. This add-on can be a bit pricey, though.

The 2017 Chrysler Pacifica is all-new, with enhanced styling, new tech and luxury features, 8-passenger seating, and an upgraded and more fuel-efficient drivetrain. It comes with a plug-in hybrid that manages up to 33 miles of EV range. The Stow ‘n Go seats are much more comfortable, which complements the already immensely improved driving experience. The Pacifica boasts new pistons, camshafts, and valves while bringing fuel efficiency from using the Atkinson combustion cycle.

There are several variants for this model in 2017, which include LX, Touring, Touring-L, Touring-L Plus, and Limited.

Standard features include power windows, power locks, and power mirrors. The Pacifica also includes 17-inch tires, and there is also active noise cancellation inside the cabin. The touchscreen audio system includes AM/FM radio, Bluetooth capabilities, and streaming options. Many of these features are controlled from the steering wheel.

The Touring models add many fan favorite features, which include the following:

The Pacifica’s engine is considerably fuel-efficient given the power it produces. The V6 reaches 287 horsepower, which puts out more acceleration than some rivals. Hills and turns are not a problem for this vehicle, even when it is completely loaded to the brim.

Gas economy is about what can be expected for such a roomy minivan. It reaches 18 miles per gallon in the city and 28 on the highway.

The Pacifica has received amazing ratings all across the board. The NHTSA rates it with five stars for Overall Rating, Frontal Crash, and Side Crash, and notes four stars for Rollover. The IIHS gives the Pacifica good ratings in all categories.

Many safety features that are common in SUVs and minivans can be found in this vehicle. These features include the following:

The Pacifica feels a bit more agile than other minivans on the market, which was most likely inspired by its origins as an SUV. Therefore, climbing hills and passing on the highway are rather easy and comfortable. Very few rivals can match the fuel economy of this minivan as well. The newly redesigned transmission allows for much of this power to occur as it coasts through nine speeds with ease. Given the power and safety this minivan offers, it ranks as one of the most comfortable rides on the market. Because it is so spacious and safe, a family can travel across town or the state with comfort. It also has strong breaks and sharp steering, making it very easy to handle for its size.

The Pacifica may be remembered as an SUV by many Chrysler fans. Due to these origins, riding in the 2017 Chrysler Pacifica is more like riding in a car than in a large van. However, it has made a grand transition into a reliable and efficient minivan that aims to please and meet the needs of families of all sizes. It is responsive on the road and economical for its size. This model modernizes family transportation in ways that have not been imagined in the past.

Thinking of buying a Chrysler Pacifica? Already own one? Leave a comment and let us know what you think!

Replace this widget content by going to Appearance / Widgets and dragging widgets into this widget area.

To remove or choose the number of footer widgets, go to Appearance / Customize / Layout / Footer Widgets.

Replace this widget content by going to Appearance / Widgets and dragging widgets into this widget area.

To remove or choose the number of footer widgets, go to Appearance / Customize / Layout / Footer Widgets.