Audi’s top-tier German engineering graces us with its presence every year in a variety of different vehicle classes, ranging from the classic and wildly popular TT Coupe to, at least beginning in 2005, the formidable, spacious, and luxurious full-size SUV, simply called the Q7. 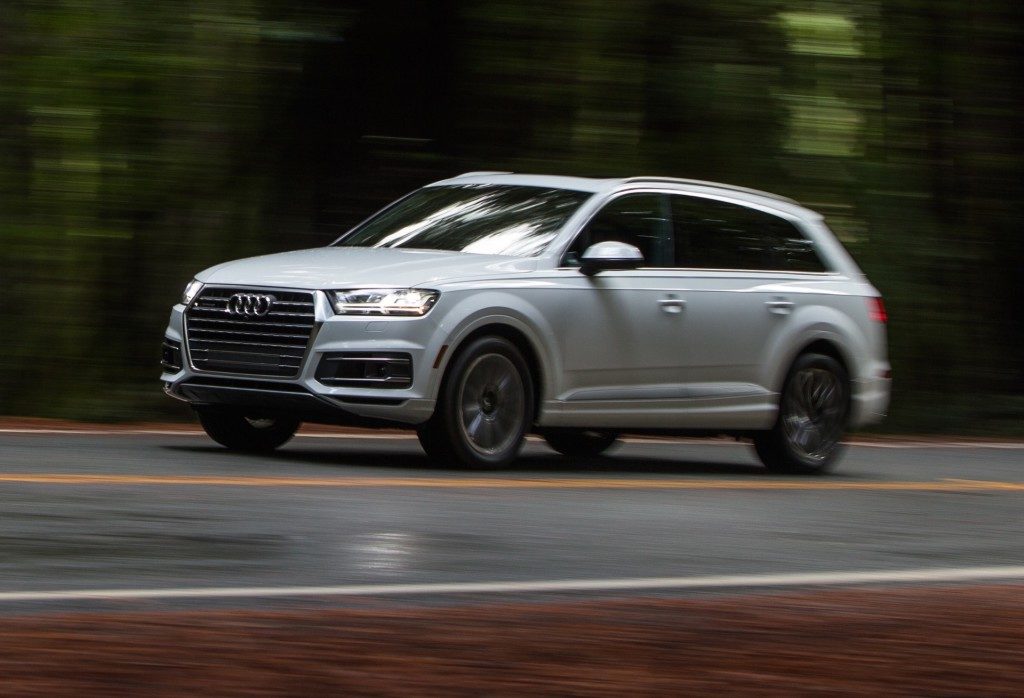 Unlike many other manufacturers, however, Audi has actually changed the design and features of the 2017 model. Like other full-size SUVs, the Q7 is pricey, but do these changes deserve your hard-earned cash?

For all its praises, the Q7 unfortunately suffers from the same seating issues as other vehicles of this size that feature three rows of seats: while the first and second row is perfectly comfortable for just about anyone, the third row is definitely meant for children, and even they may find themselves cramped after long periods of time unless they are particularly small.

It’s a bit of a shame that Audi couldn’t have fixed this problem when overhauling the design, but as long as you don’t mind frequently stopping to stretch on longer trips, the third row could be considered acceptable.

Although Audi does not specifically state on their website exactly how much cargo room is available in the Q7, it should be noted that both the second and third row of seating features power folding capabilities, allowing for more than enough room for luggage if all three rows of seats aren’t being used.

2017 seems to be a bland year for a lot of manufacturers on the design front, but happily, Audi is an exception here. The new Q7 features a more angular and somewhat car-like design when compared to its older brother, which not only adds to the overall aesthetic but also allows it to perform better in some of the safety tests in which other full-size SUVs often struggle (more on that later). In addition, these design changes have resulted in significant weight loss, which in turn has resulted in improved road performance and fuel economy.

The changes aren’t all simply cosmetic, though; the interior has gotten some new bells and whistles, too, including overhauled infotainment and sound systems.

Under the hood, the engine options for the Q7 haven’t changed from last year, but that’s not a bad thing. Buyers have two options: a 2.0L, 250-horsepower turbocharged I4 or a 3.0L, 333-horsepower supercharged V6. Naturally, the I4 will result in better fuel economy, while the V6 is recommended for heavy towing and off-road adventures. That said, the performance of either of these engines shouldn’t be underestimated; the I4 can get the Q7 off the line from 0 to 60mph in under seven seconds, while the V6 can do is in 5.7 seconds. These are quite impressive numbers for a vehicle of this size and weight class, but they aren’t surprising–Audi has been known to pack a punch in all of their vehicles for years.

Furthermore, the Q7 comes standard with electric power steering and several driving modes for terrain management, including city, highway, off-road, and even a mountainous mode. The key word here is “standard”. It’s nice to see these types of high-end features included on all models, rather than paying for extra packages to receive them.

Where to even begin? This is quite possibly the Q7’s greatest strength…but it can come at a price if you’re not careful. An 8-inch multimedia interface with capacitive touchscreen and ten-speaker audio system comes standard, along with iPod/smartphone connectivity, USB ports, auxiliary ports, AC power ports, Apple CarPlay, and Android Auto all come standard.

That’s already enough tech features to satiate the vast majority of consumers, but it only scratches the surface of the possibilities to be had when a prospective buyer starts adding additional packages. You can order multimedia interfaces for the second and third rows, for example, along with one of the finest sound systems ever placed into a vehicle: a 23-speaker, 1,920W Bang & Olufsen BeoCore implementation that’s sure to please any audiophile out there.

Rear-facing camera? Check. Automatic forward braking? Check. Active lane switching? Check. All of these features come standard, and there are more if you choose to pay for them. Advanced packages such as 180-degree surround cameras, rear-end collision mitigation, night vision, adaptive cruise control, and traffic jam assistants are all optional packages, allowing you to configure a downright futuristic vehicle if you choose.

Although the Q7 has not been federally tested, the IIHS gave it five stars in literally every crash test scenario–something about which few other vehicles can safely boast. This even includes rollover testing thanks to its revamped, wagon-like design, which few other full-size SUVs and crossovers can claim. There’s nothing more to say; the Audi Q7 is one of the safest full-size SUVs on the market today.

As expected for a vehicle in this class from a manufacturer whose name is often associated with luxury, the Audi Q7 does not come cheap, even in its base configuration. The Premium edition starts at $49,000 and comes with more of the features listed above, except for the surround cameras, pedestrian tracking features, and premium sound system.

The Premium Plus model starts at $53,000 and adds upgraded LED daytime running lights in addition to LED headlights and taillights and an upgraded ambient LED internal lighting system that includes door and side inlays. The multimedia system also adds GPU functions.

Finally, the Prestige model starts at a whopping $65,000. For that extra money, the 3.0L 330 hp engine comes standard (it’s a $6,500 add-on to the other models). In addition, this model includes an integrated child door lock in the back row, along with four-zone climate control (as opposed to three-zone in the other models), heated seats in the first two rows, an upgraded 19-speaker, 558 W Bose sound system (the 23-speaker Bang & Olufsen system comes in its own add-on, unfortunately), and the multimedia interface receives handwriting recognition.

The other safety features mentioned above, along with the upgraded sound system, can be added in even more packages after selecting the trim. This can easily skyrocket the price of the Q7 into the stratosphere, easily topping $85,000.

Make no mistake about it: the Audi Q7, while possibly being one of the all-around best full-size SUVs on the market, is certainly not for everyone. $49,000 for a vehicle is already expensive, but getting the most out of your Q7 will definitely cost a pretty penny. That said, you get what you pay for, and those who have the means to justify such a purchase will be more than happy with the 2017 Audi Q7.

Thinking of buying a Audi Q7? Already own one? Leave a comment and let us know what you think!