The 2014 Nissan Rogue was a total second-generation redesign of this compact SUV that distinguished itself from its main competitors: Ford Escape, Honda CR-V, Subaru Forester, and the Toyota RAV4 with a continuously variable transmission, fuel efficiency economy up to 33 mpg, and standard third row seating. Sharing Nissan’s Sentra sedan platform, the Rogue offers a comfortable, but far from exhilarating ride. Overall, the 2015 Rogue is better than previous models, and leads its class in fuel efficiency.

The 2015 Nissan Rogue’s four-cylinder, 2,500-cubic centimeter, 170–horsepower engine and Xtronic continuously variable transmission are fine for routine, everyday driving but not so good where power can be important and not as powerful as are many of its rivals. For a variety of driving conditions and surfaces, the AWD models reduce the fine fuel efficiency of the FWD only slightly. If strong towing ability is necessary, the buyer should know that the Rogue’s tow rating is only 1,000 pounds, a half ton. As a comparable, the Jeep Cherokee can tow up to 4,500 pounds, two and a quarter tons.

The Rogue’s high fuel efficiency compensates for its low power. Road feel is more secure than in previous models. The independent suspension controls ride quality very well, making it almost firm. Assisting the suspension in ride quality control, the electronic stability control system can damp acceleration to smooth out bumps and clamp the inside front brake to draw the Rogue through corners nimbly. The effects are subtle but may be sensed by disabling the system.

Step hard on the gas and the Rogue’s transmission simulates an automatic with an infinite set of gears. As the Rogue has no fixed ratio points or shift paddles to reach them as does the Subaru Forester, acceleration from 0 to 60 mph is at least eight seconds with a noisy pause, better in some ways than was the former Rogue but unimpressive compared to turbocharged four-cylinders and automatics in other SUVs.

All Rogues have standard curtain airbags, electronic stability control, rearview cameras, and tire pressure monitors. The National Highway Traffic Safety Administration gave the Rogue one five- and three four-star safety ratings, and the Insurance Institute for Highway Safety made it a Top Safety Pick with top ratings in all safety categories. Safety options include an AroundView camera system, blind-spot monitors, a lane-departure warning system, and a forward-collision alert system.

All 2015 Rogues come with standard curtain airbags, stability control, tire pressure monitors, and Nissan’s Easy Fill tire alert. Visibility is fairly good, though the uptick at the rear pillars blocks some vision. Blind-spot monitors, lane-departure warning, and forward-collision alert are safety options. An AroundView camera system is optional on the SV and standard on the SL model. Four cameras give drivers a 360-degree view of obstacles and make parking everywhere much simpler and easier.

The Nissan Rogue is the best looking version up to now. Exterior proportions appear to be pleasingly appropriate, and the interior feels upgraded and inviting with high-quality, elegantly ordinary materials. Its layout is for quick perception of operations with round knobs for climate and audio controls framing a center stack with a liquid crystal display monitor, a cowl over the gauges, and a slight dip over a pair of slim vents.

Nissan in the past few years has modified styling gradually to remove some odd flourishes. There’s a plain, straightforward grille between chrome bars and light-emitting diode headlights. All body details push the Rogue’s corners in directions more evocative than those of the drabber first-generation body styling.

Rogue five-seat models have the Divide-N-Hide cargo storage system. Securing odds and ends is a challenge to which the Rogue’s storage option responds with an ingenious system to accommodate all small-to-medium cargo in 18 storage variations that include a fold-back passenger seat. The third-row seat is offered only on Rogue SV and SL models.
The Rogue excels in gas mileage and in road manners. The EPA-estimated 28 mpg city/highway combined fuel efficiency for both FWD and AWD models makes the Rogue a standout in this performance category for its class.

A new function, Active Ride Control, directs transmission and engine responses to smooth the Rogue’s body motions over uneven surfaces. Active Trace Control can apply a brake or adjust torque to an inside wheel for stability in cornering. The Rogue steers heftily, damps its ride for constant comfort, and feels substantial and composed in all driving conditions.

The first thing to notice is somewhat handsome styling, a little more conservative and contemporary than before. Interior organization and finish are better with attractive materials of higher quality. Dense seat foam and adjustable back-seat space keep passengers comfortable, and front-seat heating controls warm up sensitive contact areas. For the driver seat, power is available but not for the front passenger seat, which, however folds down to add cargo space.

The 2015 Rogue is not a high-powered SUV. Acceleration is hesitant in passing situations and on steep hills. Very good fuel efficiency, however, is not a negligible tradeoff when the price of gas is high. Otherwise, this SUV’s motion is well controlled, its powered steering gives a good feedback of road conditions, and ride quality is one of constant comfort. 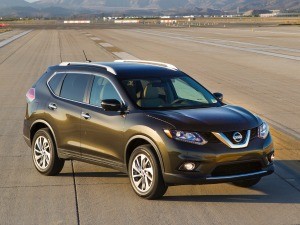 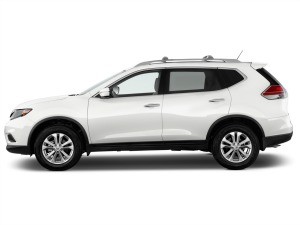 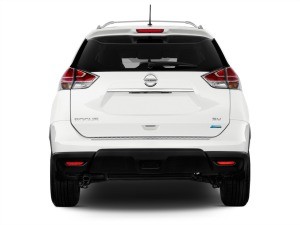 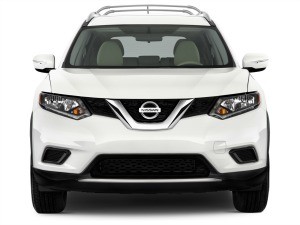 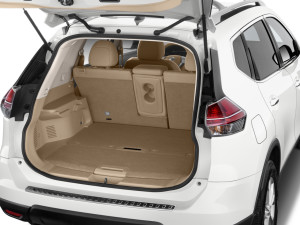 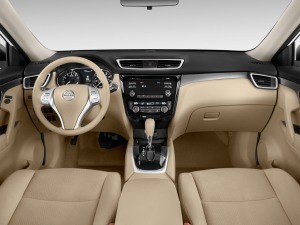