The Kia Sorento is a highly versatile family vehicle that offers excellent value. Larger than most compact crossovers, the Sorento can transport seven passengers when equipped with its optional third-row seating, which is rare for the class. For more cargo space, buyers of this feature-packed crossover SUV can opt for the two-row, five-passenger configuration.

After undergoing an extensive under-the-skin redesign last year, this athletic-looking sport UTE has several improvements for 2015 that make this crossover even more popular with tech-and fashion-conscious buyers. In addition to a wider stance, restyled front and rear fascia, the Sorento has a completely redesigned suspension and NVH—reducing measures that produce a whisper-quiet interior. Buyers also have the choice of a more fuel-efficient 4-cylinder engine and a navigation option that does not require an upgraded trim level. The Sorento wows reviewers with its power, safety, flexibility and the number of features available for cost-conscious families.

For 2015, the Sorento is available in four trim levels. In addition to riding on 17-inch alloy wheels, the base LX, with an MSRP of $24,300, is equipped with full power accessories, including air conditioning, cruise control and a tilt-telescoping steering column. In cabin electronics include Bluetooth connectivity, steering wheel-mounted audio controls and a six-speaker sound system with satellite radio, USB/auxiliary input jacks and a CD player. Roof rails, a third-row seat and the more powerful V6 engine are available options.

While all trim levels utilize a 6-speed, automatic transmission, buyers have a choice between two impressive powertrains. The options are a direct injected, 191 horsepower 2.4-liter engine producing 181 pound-feet (lb-ft) of torque and a 3.3-liter direct injected V6 rated at 290 horses and 252 lb-ft of torque. The smaller engine provides an EPA estimated fuel economy rating of 20 mpg in the city and 27 mpg on the highway. The 99-pony advantage of the V6 only drops the fuel economy rating to 18/25 mpg. The 290 ponies of the more powerful mill can also accelerate a Sorento from the starting gate to 60 mph within 7.5 seconds compared to the 8.3 second rating for the smaller 4-cylinder engine. The SUV’s anti-lock disc brakes bring it to a complete stop from 60 miles per hour in 126 feet. Although it drops highway mileage by one mile per gallon, the available all-wheel drive option improves handling in adverse weather due to its torque vectoring system.

The 2015 crossover is nearly identical to last year’s model that received the Insurance Institute’s top rating of “Good.” The organization has not rated the current version for highway safety. The Kia Sorento has earned a perfect five-star rating in government crash tests.

In addition to electronic traction and stability control, all Sorento models are equipped with dual front as well as front, first- and second-row side curtain bags. Other standard safety features include hill assist, antilock disc brakes and active front head rests. Higher EX and SX trim levels include rearview cameras and parking sensors. Drivers can include the SX blind spot monitoring system as an option on the LX. The UVO telematics system can be equipped with secondary driver tracking, roadside assistance and collision notification features.

While the exterior is mostly unchanged, the cabin has been given a fresher more contemporary feel. Kia has dispensed with most of the Sorento’s former inexpensive-looking hard plastic surfaces. The interior now features additional soft-touch materials, polished metal trim, a new center stack with premium-looking controls and a reworked instrument cluster that makes room for a larger LCD screen. The 8-inch touchscreen has crisp graphics, user-friendly menu and interfaces. The UVO voice-activated infotainment system provides seamless smartphone, streaming audio and navigation system integration while including vehicle diagnostics and maintenance reminders.

Although the third row is tight, the 2015 Sorento can comfortably seat five passengers with ample head and legroom. Dropping the third row increases cargo space from 9 to 37 cubic feet. Stowing the second row provides an impressive 72 cubes. The 40/20/40 second row slides, folds and reclines for added flexibility.

The Sorento has solid comfortable ride with easy to use electronic interfaces and minimal road noise at highway speeds. The supportive seats offer a commanding view of the road ahead. Drivers who need power for passing and merging should opt for the V6 engine because the base four-cylinder can be underpowered in these highway scenarios. The automatic transmission provides smooth and timely gear changes. The Sorento maneuvers well in tight spaces and around corners with its smooth responsive handling. Flex Steer enhances the driving experience by allowing drivers to select between Comfort, Normal and Sport settings. 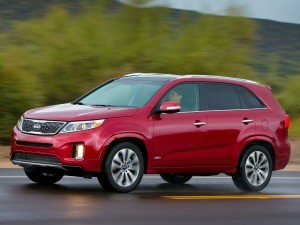 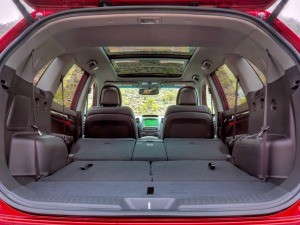 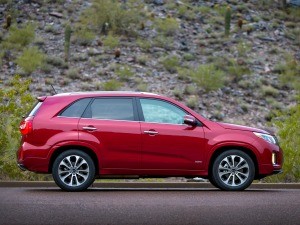