The 2014 Acura MDX’s interior and exterior features includes selective upgrades and seat up to seven passengers. New changes include a more user-friendly control interface, a higher grade and quieter interior, a rounded out exterior ‘beak,’ and a 17 percent improvement in combined mpg.

The MDX’s interior functions have the ability to sync with different devices and contact lists with a smartphone.

Electronics features include an eight-speaker sound system with a CD player, twin console displays (7-inch and 8-inch touchscreen information), a multi-angle rearview camera, Bluetooth phone connectivity, an iPod/USB interface, and a Pandora radio interface and satellite radio. Aside from the MDX’s standard features, consumers who choose the Technology package have access to:

The Advance and Entertainment package includes all of the above features along with:

“With its pleasant handling and ride dynamics and generous feature content, the highly evolved 2014 Acura MDX earns our recommendation for drivers seeking a three-row crossover that hits the sweet spot when it comes to driver engagement, luxury and value.” – Edmunds

“Around town, the use of additional sound-deadening materials, acoustic front glass and active noise cancellation help make this MDX the quietest ever.” – Kelley Blue Book

“Fans of the past MDX’s deliberate driving characteristics – heavy, swift steering; a busy ride; a growling V-6 – will be disappointed, but I suspect most shoppers will deem the new generation an improvement.” – Cars.com

“The third row is best suited for kids, but adults should be OK back there on short trips. Accessing the third row is a breeze, thanks to power-sliding second-row seats that slide forward with the touch of a button.” – Edmunds

Compared to vehicles within the same class, reviewers give the 2014 MDX SH-AWD a thumbs up for its acceleration capabilities, going from zero to 60 mph in 6.8 seconds. The MDX’s 3.5-liter V6 engine produces 290 hp (less horsepower than the 3.7-liter it replaces) and when properly equipped, the MDX can tow up to 5,000 pounds (267 pound-feet torque power) due to its direct fuel injection technology. As an option, consumers can select all-wheel drive performance; however, front-wheel drive and a six-speed automatic transmission are standard. The MDX has an EPA-estimated fuel economy of 21 mpg combined (18 city/27 highway for the) for the all-wheel drive version while the front-wheel drive version has a fuel economy of 23 mpg (20 city/28 highway).

Standard safety features included in the MDX are active front head restraints, traction/stability control, side airbags for the front-seat, side curtain airbags, a knee airbag for drivers, multi-angle rearview camera and anti-lock disc brakes. The added benefit of the all-wheel drive version is that it has a stabilizing feature for trailer towing. On the downside, the MDX’s handling performance fell below the rating expectations of other vehicles in its class for its performance capability when it was tested with making sudden (it required 129 feet to stop from 60 mph) or successive stops, which takes even longer. The MDX is also offered with collision mitigation braking and lane-keeping assist system as well; the lane-keeping assist system provides automatic steering assistance to keep the SUV in its lane.

The MDX’s interior cabin design is a remarkable improvement from last year’s model that is mostly focused toward the driver’s comfort, featuring a plush leather-wrapped steering wheel and readable gauges and a simplified center stack. The interior has more of an organized layout and two display screens, which largely replaces countless performance buttons on Acura’s previous line of vehicles.

The navigation system is intuitive but simple and allows the driver to reach destinations using one of the following features: an enhanced voice recognition system, central control dial, or a new 7-inch touchscreen interface (mounted underneath the 8-inch navigation screen.

For added flexibility, second-row seats now slide forward and backward with the touch of a button to facilitate third-row access, having an adjustment range of 5.9 inches and acceptable rear legroom overall. Compared to other models in this area, the front seats are comfortable, but only offer basic adjustments. The SUV’s third row is more compatible for kids (or pets), but has suitable capacity to accommodate grownups while riding on short trips. Although the MDX does not have as much cargo space (15.8 cubic feet behind the third row) as its biggest SUV rival, cargo space becomes a lot roomier when the second and third rows are folded, with 90.9 cubic feet of room available for personal belongings and luggage.

For drivers seeking a three-row crossover, the MDX offers pleasant driver engagement, luxury and value with an overall excellent five-star safety test record. It also delivers a firm ride with very low levels of wind and road noise that remains steady even during acceleration. Having just six forward gears, the transmission is smooth and downshifts quickly in shift paddle mode or at full acceleration.

Unfortunately, neither of the MDX’s cabin touchscreens tout high resolution graphics. Additionally, the virtual touchscreen buttons that handle the more basic functions tend to distract the driver, because they require multiple pushes. Another disappointment is the relative lack of radio presets, and the seat and lumbar support are not adequately explained. There are no fog lights on the SUV and the traffic displays on the navigation panel are difficult to read. Some drivers also report getting a significant glare off the aluminum trim around the center console and the entertainment center. 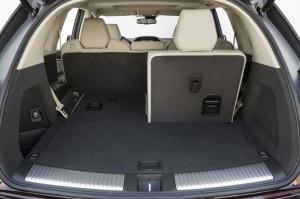 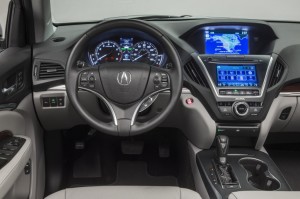 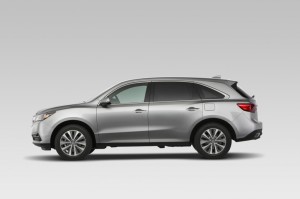 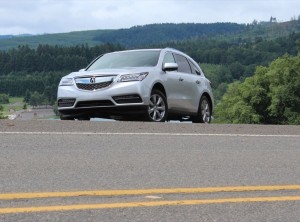