Mitsubishi’s popular Outlander finally reaches peak maturity with the 2013 model. It’s the last of its kind because a new incarnation emerges in late 2014. However, seven is traditionally the number of perfection and the 2013 Outlander is both attractive and functional. A GT model joins the basic ES and tougher SE models. Some new modifications will give the vehicle a bit of aftermarket longevity. Some of these include heated side mirrors and heated front seats — SE and GT only for the latter. The GT looks pretty cool with a slightly angular front design tweak, too. The improved cabin also one-ups the 2012 models and provides adequate room for five or seven passengers.

The wheels go from steel to alloy and from 16 to 18 inches with the SE model. The SE also adds keyless remote ignition, mirrors with signals, climate control, better upholstery and front seat heating. The perks are capped by a 6-CD changer and voice integration for Bluetooth and iPod by Fuse — so make those calls and crank the tunes.

Somebody who feels looser with their funds can opt for the SE’s Premium upgrade. The extra money goes to a rearview mirror auto-dimming and a camera, “softouch” interior trim, the ever-important sunroof and a 9-speaker sound system by Rockford Fosgate — yes, it includes satellite radio. For the GT, there’s the Touring upgrade: same as above plus leather upholstery for the front and middle rows, front seat heating and power-adjust for the driver’s seat. The following options are available for all three models: a tow hitch, interior LED lighting, remote ignition function, a rear entertainment system augment and a HD-based digital navigation system with traffic data that includes 40 gigs of space for music storage.

There’s nothing pansy-esque about the 2013 Outlander’s chic cool cabin and its modernistic lines and lack of gratuitous curves. The vehicle looks just fine in the city or the country in all types of weather. The softouch door and dash trims don’t upset the balance. While it looks fine by itself, it may not match models in its size and price class by Kia and Ford.

Unfortunately, the third row seat in the SE and GT is too cramped for anything besides the family dog or a roll of carpet. It’s also too close to the back of the vehicle and practically hugs the rear glass. However, cargo space expectedly jumps when the third and middle row seats are folded down, with roughly 70 cubic feet of space and a support threshold of over 425 pounds. That definitely beats the Ford Escape and Toyota RAV4.

“The 2013 Mitsubishi Outlander is an enjoyable, well-equipped vehicle in top-of-the-line GT form; but value-conscious families have plenty of better (and fresher) choices.” – The Car Connection

“The Outlander differentiates itself from the competition with an array of optional tech features along with aggressive styling, generous cargo space and available (if snug) seating for seven.” – Kelley Blue Book

The ES and SE run on a 2.4-liter, 168 horsepower 4-cyclinder engine while the GT gets a 3.0-liter, 230 horsepower V6. The 4-cylinder engine cranks 167 pounds of torque and the V6 blasts 215 pounds. The ES and SE are fitted with standard CVT — continuously variable — transmissions. The GT is a 6-speed automatic. When it comes to fuel economy the 4-cylinder engines get 19MPH on the highway and up to 26MPH on the freeway. The GT’s V6 gets a couple more miles in either rating but the AWD V6 drops it back to 19MPH and 25MPH, respectively.

The Outlander doesn’t skip over safety with its front-seat side and full-length side panel airbags and antilock brakes. Front head restraints help curb the possibility of whiplash and the vehicle has stability and traction control. In spite of all this, the Outlander’s roof strength was gauged as average and the vehicle only got a top rating of “Good” from the Insurance Institute for Highway Safety. NCAP gave it four out of five stars in every safety category.

As a pure driving experience, the 2013 Mitsubishi Outlander is remarkably pleasant and makes up for some of its shortcomings in other areas. It handles well and a bit better than other crossover vehicles. The Outlander’s suspension handles at a more athletic level without compromising comfort or power. The steering doesn’t feel flimsy no heavy, either, but has a feeling of gravity proportionate to the vehicle’s size. The GT’s all-wheel drive keeps everything on the ground through sketchy terrain like snow, sand and loose gravel, too. It isn’t as powerful as Toyota’s RAV4 or Kia’s Sorento but it accelerates quite well. It must be noted that it is one just a few crossover vehicles with a V6 option. A V6 enables it with a 3500-pound towing capacity. It will no doubt appeal to many motorists shopping for a vehicle in its class. With the improvements over the 2012 version, it certainly makes a solid candidate for what it offers. 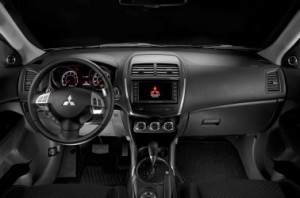