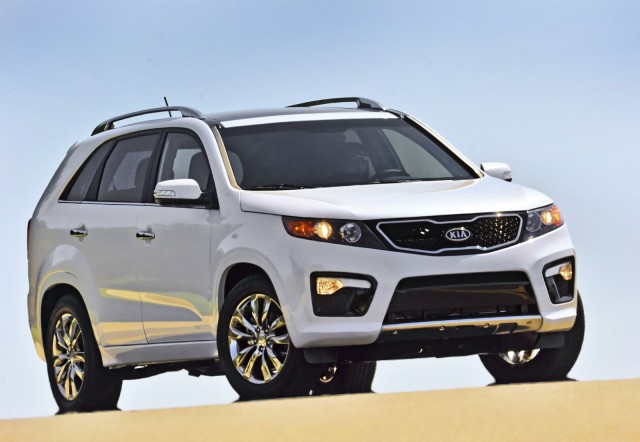 The 2013 Sorento is Kia’s latest entry into the mid-size crossover market. Since ditching the truck based platform in 2011 for the current Kia Optima based foundation, the Sorento has evolved into a solid contender within the extremely competitive crossover niche that is packed with options from Toyota, Chevrolet, Hyundai, etc.

The Sorento rests in a size category comparable to the Honda CR-V. It is larger than the Kia Sportage but slightly smaller than the Toyota Highlander. Even with this small to mid-size build, the engineers at Kia managed to design an interior that offers three rows of seats, with a third row seat that can be used for more than just stashing a couple kids in the back.

For 2013, there are no prominent mechanical updates and very few design changes. The exterior sheet metal remains the same, while some minor package enhancements have been made for interior options. Seats in the EX trim option are now leather and the LX gets the Uvo electronics system featuring voice control.

There are three trim levels available for the 2013 Kia Sorento. All three levels, the LX, EX and SX, come with seating for 5 passengers as the standard configuration with the exception of the LX V6 ($25,700) and the SX model ($31,700); these two come with a split rear seat that folds for additional cargo room and increases seating capacity to seven.

In the base LX package offers standard features including alloy wheels, tilt and telescoping steering wheel, power windows and mirrors, air conditioning and heated mirrors. Standard electronics include Bluetooth, a USB iPod interface, a 3.5 millimeter auxiliary input jack and a stereo that includes a CD player.

Adding the convenience package to the LX steps the model up with fog lights, rear parking sensors, auto dimming mirrors, heated seats in the front and the Uvo electronics package. This package also bumps up the power on four cylinder models and includes the third row seat.

While the LX model comes already equipped with quite a long list of comfort features for passengers, the EX raises the bar slightly higher. This model includes everything from the LX convenience package along with automatic headlights, keyless ignition, an eight way power driver seat, leather and dual-zone climate controls.

Adding a V6 to the EX model opens the door for the premium package. This adds the third row seat, rear a/c, a power passenger seat, rearview camera, Infinity sound system, an auto-dimming mirror and sunroof. The limited package includes all of these features and adds a ventilated driver seat.

With the top of the line SX model, the only engine choice is the V6, and most additional features are styling related. Most of the EX premium package is included as standard equipment for the SX, although the wheels are different, and it has LED tail lights. With the SX premium package, the rest of the EX options are added along with a heated steering wheel.

“With carlike unibody construction, secure handling, and a high level of standard and available technology, this Kia trades on more than good looks.” – Car and Driver

“In true Kia tradition, all of this comes at a price that undercuts its rivals. Essentially, the Sorento offers the size and equipment of a more expensive crossover.” – Edmunds

“With its good looks, host of amenities and premium options such as ventilated leather seats, the U.S.-built Kia Sorento is a seriously pleasing family vehicle. Throw in Kia’s value pricing and its 10-year/100,000-mile powertrain warranty, and the Sorento becomes an even more attractive alternative to rivals like the Chevrolet Equinox and Toyota Highlander.” – Kelley Blue Book

There are three engine offerings for the 2013 Kia Sorento. The base LX model has as standard a 2.4 liter four cylinder offering 175 horsepower and 169 pound-feet of torque. Reviewers report a zero to 60 time of 9.9 seconds. Since this model is not intended for drag racing, the fuel economy figures are most likely of more interest for those interested in this size SUV. The EPA estimated fuel economy is 21 MPG city, 29 MPG highway and 24 MPG combined for the front wheel drive. Adding all-wheel drive drops the fuel economy to 20 MPG city, 26 MPG highway and 22 MPG combined.

Stepping up to the optional direct injected four cylinder increases horsepower to 191 and torque to 181. Even with the extra power, fuel economy largely remains the same with slight improvements to the highway mileage in both front wheel and all-wheel drive configurations.

The safety rating for the 2013 Sorrento is impressive with the vehicle achieving four stars for overall protection in government crash testing. Front impact protection also rated four stars, and side impact achieved a top score of five out of five stars.

Standard antilock disc brakes allow the Sorrento to stop in 131 feet from 60 miles per hour. Additional safety features include active front head restraints, side airbags in the front seats and side curtain airbags for the first and second rows seats.

While the interior of the Sorrento is at no risk of being mistaken for European luxury sedan, it has many standard features and comforts that make it a comfortable drive. Gauges are large and well placed, and the controls have large knobs that are easy to manipulate while driving. The Uvo electronics interface is based on the same underlying tech as the Sync system from Ford. Passengers can use voice commands to control electronics including music players and Bluetooth smart phones.
Cargo space with the third row seat folded down comes in at 72.5 cubic feet, comparable to the Toyota RAV4 or Honda CR-V.

The base 175 hp four cylinder is serviceable enough for everyday driving, but it is not well suited for carrying a full load of passengers or cargo. Opting for the 191 hp four cylinder certainly makes hauling extra loads a more pleasant experience.

Handling is above average with good steering makes driving the Sorento quite enjoyable. Adding the extra power from the available V6 makes the drive even more fun in a car that is destined for a life of hauling people to and from their lives at work and school. 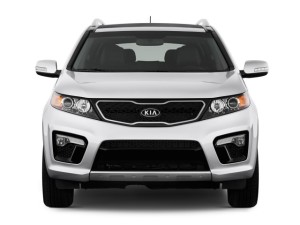 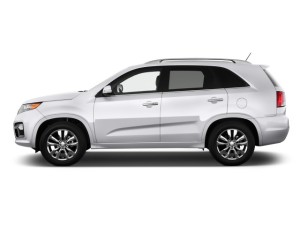 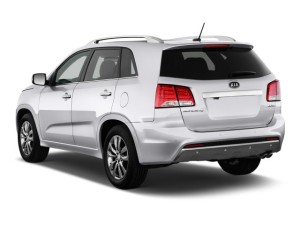 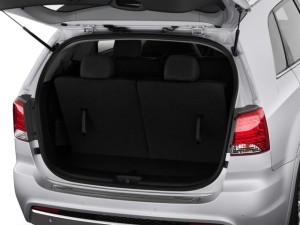